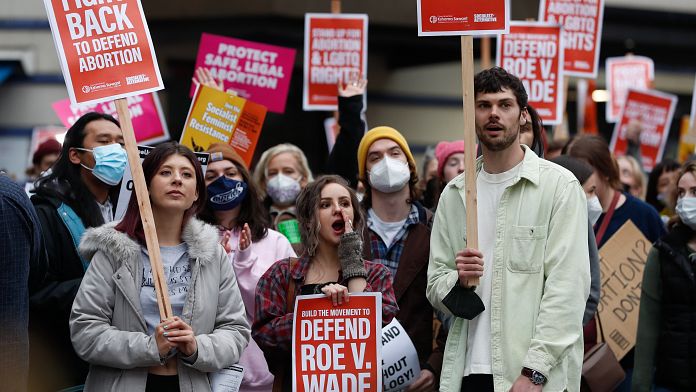 The US president said he hopes the draft will not be finalized by the judges, arguing that it reflects a “fundamental change in American jurisprudence” that threatens “other fundamental rights” such as access to birth control and marriage.

“If this decision holds, it is indeed a rather radical decision,” he added.

A decision to cancel Roe v. Wade could lead to abortion bans in about half of the states and could have huge ramifications for this year’s elections, fueling the highly polarizing issue.

It appears set to spur new efforts in democratic-leaning states to protect access to abortion.

“If the court overturns Roe, it will fall on our nation’s elected officials at all levels of government to protect a woman’s right of choice,” Biden said.

“How dare they,” he said in a speech at the EMILY’S List Political Action Committee National Conference on Tuesday. “How dare they try to deny women their rights and freedoms”.

“Women’s rights in America are under attack,” Harris said. “Today we know our purpose, we also know what we have to face”.

“We fight with everything we have.”

The Supreme Court warned that a final decision had not been made. A final ruling was not expected until the court’s mandate ended in late June or early July.

An investigation into the leak of the draft opinion that it was was arranged published by Politicoand which is an extremely rare violation of the court’s secret deliberation process.

The report comes in the midst of a legislative push to limit abortion in several Republican-led states – Oklahoma being the most recent – even before the court issues its ruling.

In contrast, leaders in New York and California have rolled out the welcome mat in their states for abortion-seeking women and other Democratic states have moved to protect access to abortion in their laws.

Since the news broke, rival groups of protesters have started taking to the streets, some organizing a demonstration in front of the Supreme Court.

A Los Angeles protest briefly turned into a skirmish with police, who said one officer was injured.