Are all gaffes equal? Interest rates v the price of bread

When is a gaffe front-page news? When it’s day one of a six-week election campaign and nothing much else has happened apparently.

As we cover elsewhere in Crikey today, yesterday Opposition Leader Anthony Albanese was asked what the current interest rate level and the unemployment level were and he came up empty-handed on the numbers.

It drew comparisons to Prime Minister Scott Morrison’s start-of-the-year brain fart when he couldn’t tell reporters the price of bread, petrol or RATs. But are these mistakes cut from the same cloth? The public reaction to them suggests not. 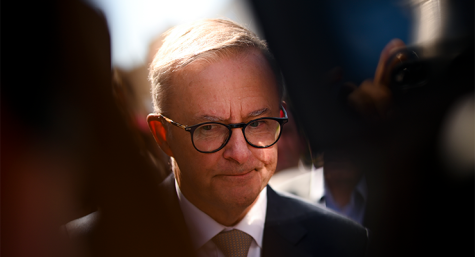 Let’s travel back in time to February 1. Omicron is on the rise, people’s Christmas and new year have just been wrecked by the evil strain with the Digimon name, and Morrison has already told reporters a porkie about this Aussie bloke (him) casually swinging by a pharmacy in Terrigal to pick up a RAT. (Turns out Morrison gets all his RATs free, and the Terrigal pharmacy stop happened in a chauffeur-driven car, without the PM actually setting foot inside said pharmacy. Oops!)

The people are pissed off and Morrison’s “everyday bloke” schtick is wearing thin. Then it gets absolutely blown apart when he can’t put a price to a loaf of bread. How unAustralian is that?

Former Liberal prime minister John Howard, reporters were quick to point out, used to carry an up-to-date list of cost-of-living prices around in his folder for such a time as these.

The general consensus (online at least) was, yes, it was a bit of a gotcha question, but Morrison couldn’t have done a better job at illustrating how out of touch he was with voters if he’d told them to eat cake.

So what was different about what happened yesterday with Albanese? Weirdly, he had a few things working, if not exactly for him, then not against him.

First, as Bernard Keane writes elsewhere in Crikey today, yes, it’s a question he should have absolutely known the answer to. But not being able to rattle stats and figures off the top of your head is (a bit sadly) quite relatable. Almost like Kevin Rudd’s trip to a strip club in New York City, it just kinda makes him seem normal. Plus Albanese apologised later the same day (the same day Morrison couldn’t name the price of milk he also refused to apologise for not doing more about the COVID-19 situation).

Second, Howard (hello again!) told reporters he didn’t think it mattered a bit that Albanese didn’t know the unemployment rate — nothing like a bit of support from across the aisle.

Third, if you look at stats about leader’s “share of voice” yesterdayAlbanese was in the lead. Not bad for a man who we’re constantly being told is a cardboard cut-out with no vision or personality.

Albanese dominated headlines yesterday and while it wasn’t all good (David Crowe in the SMH made some huge claims about just how bad this would be for Albanese), not all of it was bad. In fact, just the fact that the Labor leader’s gaffe brought back memories of Morrison and the price of bread shows that not all gaffes are equal, but in an election campaign they’re all on the table.

As Christopher Warren wrote in Crikeyfor the media the election campaign started yesterday. But the pollies have been preparing for it for the past six months — and so have voters.