Biden calls for gun control after a Texas school shooting 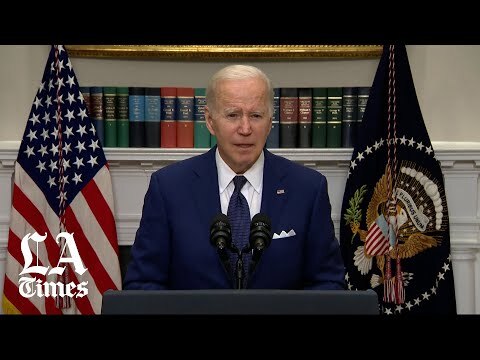 For the second time in less than two weeks, President Biden on Tuesday sought to console a faltering nation for another mass shooting, calling for action on gun control and asking what it would take for lawmakers to stand up to the producers of arms and lobbyists who, according to him, have prevented “Common sense gun laws”.

“As a nation, we must ask ourselves: when, in the name of God, will we stand up in the arms lobby? When, in God’s name, will we do what we all know in our instincts that needs to be done? ” Biden said in an emotional seven-minute prime-time speech following his return from a five-day trip to South Korea and Japan.

The president’s comments came hours after a gunman killed at least 21 people, including 19 children, at Robb Elementary School in the small working-class town of Uvalde, Texas, about 80 miles west of San Antonio.

A visibly frustrated but gloomy Biden said he was “sick and tired” of the mass shootings and said it was “time for action.”

“How many dozen little children … have witnessed what happened … have seen their friends die, as if they were on a battlefield, for God’s sake?” he asked her.

Biden’s trip to Asia was interrupted by tragic shootings. Shortly before leaving on his overseas trip, he went to Buffalo, New York, cry with the families of the victims of the May 14 mass shooting in a grocery store which killed 10 people.

On his 17-hour return flight from Asia, when he learned of the latest shooting, Biden said he was struck by the fact that other countries rarely face the kind of mass shootings that regularly plague the United States.

“Why are we willing to live with this carnage?” she asked. “Where, in God’s name, is our backbone?”

Before landing in Washington, Biden spoke with the Republican governor of Texas. Greg Abbott and offered assistance, according to the White House. The president also issued a proclamation ordering American flags to be flown at half mast in the White House and all federal buildings until sunset on Saturday.

Biden also talked about the last time he was asked to stand up and talk about an elementary school shooting nearly a decade ago while he was vice president. He recalled the 2012 Sandy Hook Elementary School massacre in Newtown, Connecticut, where a gunman killed 20 children and six adults. The tragedy led to a national push for weapons reform, but the legislation was ultimately blocked by a Republican-led filibuster in the Senate.

He pointed out that more than 900 incidents of gun violence in the schoolyard have been reported since then, including shooting at Marjory Stoneman Douglas High School in Parkland, Florida in 2018 resulted in 17 deaths.

The president acknowledged that while any tragedy cannot be avoided, common sense gun laws, including a ban on assault weapons– could make a difference.

The White House has come under pressure from gun security advocacy groups to fulfill Biden’s campaign promise to curb gun violence. The president has issued a series of executive orders cracking down on so-called ghost guns, or untraceable weapons that can be built from parts purchased online; ordered the Department of Justice to create “strike forces” for arms trafficking and ordered cities to use federal relief funds to strengthen police forces and expand community violence response programs.

Prior to Biden’s remarks, Vice President Kamala Harris said she would normally say “our hearts are breaking, but our hearts keep breaking.”

“Enough is enough,” he said in brief remarks at the 20th Annual Awards Gala of the Asia Pacific American Institute for Congressional Studies. “As a nation, we must have the courage to act and understand the link between what makes public policy reasonable and sensitive to ensure that something like this never happens again.”