The breeding of bulldogs in the UK might be banned if their shape is not altered to prevent a host of debilitating conditions, a new study from the Royal Veterinary College has warned.

Flat faces bred into English bulldogs can cause a ‘lifetime of suffering’ and vets are urging people not to buy one, despite their soaring popularity over the past decade.

The research showed that bulldogs have twice the health risks of other dogs, with an increased likelihood of suffering breathing, eye and skin conditions.

This is because of their extreme physical features, including shortened muzzles, folded skin, and a squat body.

Royal Veterinary College said urgent action was needed to reshape the breed and stop the UK joining the list of countries where the dog is banned.

They also want people to stop buying French bulldogs and pugs until the breeding issues in those dogs are addressed.

The English bulldog has a short lifespan of around eight years, partly due to its health problems, and the study recommends people stop ‘promoting’ the dog on social media by posting and liking pictures.

Flat faces bred into English bulldogs can cause a ‘lifetime of suffering’ and vets are urging people not to buy on. New research shows bulldogs have twice the health risks of other dogs, with an increased likelihood of suffering breathing, eye and skin conditions (pictured) 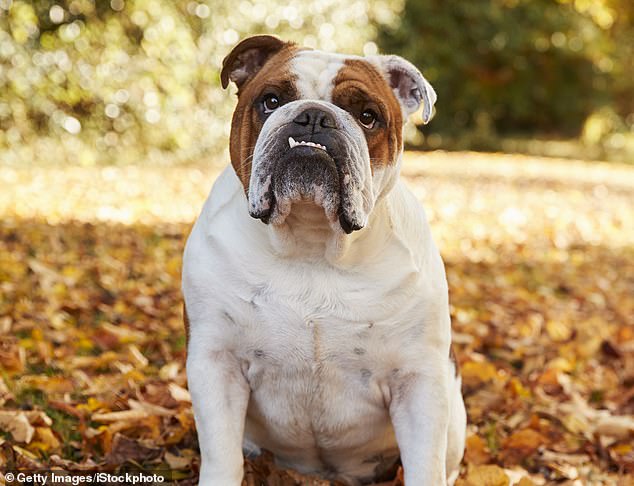 English Bulldogs are at increased risk of breathing, eye, and skin conditions due to their extreme physical features, including shortened muzzles, folded skin, and a squat body

Key findings of the report

It has nearly 20 times the risk of obstructive airways – causing breathing problems – is 13 times more likely to have a cyst between its toes, and has eight times the chance of developing mange.

The research suggests that the dogs should be bred to have more moderate physical features both for their health and to prevent their breeding being banned.

The breed was originally developed as a muscular and athletic dog for bull-fighting but has now been bred as a show and companion animal with a short skull, protruding jaw, skin folds, and squat, heavy build.

This physique has been linked to several health conditions and countries such as the Netherlands and Norway have restricted the breeding of English Bulldogs in recent years.

Study author Dr Dan O’Neill, Associate Professor of Companion Animal Epidemiology at the Royal Veterinary College said: ‘Every dog deserves to be born with equal and good innate health by having a natural ability to breathe freely, blink fully, exercise easily, have healthy flat skin, mate and give birth.

‘For breeds such as English Bulldogs where many dogs still have extreme conformations with poor innate health, the public have a huge role to play by demanding dogs with moderate and healthier conformations.

‘Until then, prospective owners should stop and think before buying a flat-faced dog.’

He added: ‘These findings suggest that the overall health of the English Bulldog is much lower than that of other dogs.

‘However, what is most concerning is that so many of the health conditions that English Bulldogs suffer from, such as skin fold dermatitis and breathing problems, are directly linked to the extreme structure of their bodies that has been selectively bred for. 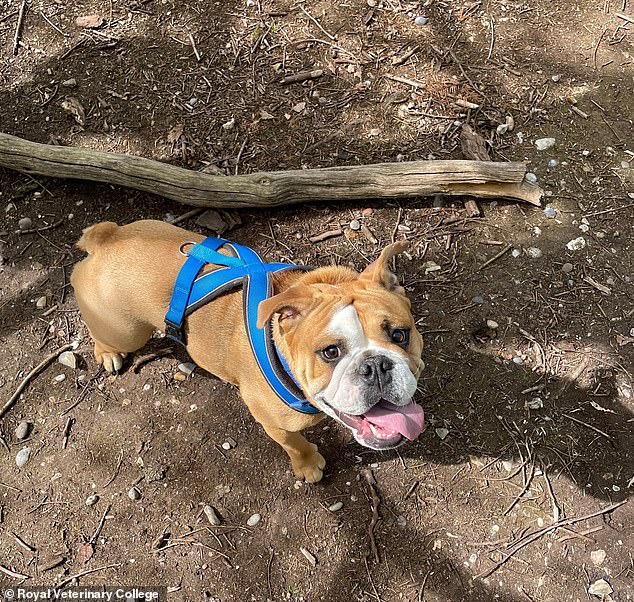 The breed was originally developed as a muscular and athletic dog for bull-fighting but has now been bred as a show and companion animal with a short skull, protruding jaw, skin folds, and squat, heavy build

‘Given the continued popularity of the breed, the body-shape of the typical pet English Bulldogs should be redefined towards more moderate physical characteristics.

‘Doing so will not only improve the dogs’ health, but could also enable the UK to avoid following other countries in banning the English Bulldog on welfare grounds.’

Researchers compared the risks of common disorders in English Bulldogs to other dogs by analysing records from veterinary practices across the UK from 2016 using the VetCompass database.

The breed showed predispositions for 24 out of 43 (55.8 per cent) specific disorders.

They were 38.12 times greater risk of developing skin fold dermatitis than other dogs.

They were also at 26.79 times greater risk of developing an eye condition called prolapsed nictitating membrane gland, also called ‘cherry eye’, where the dog’s third eyelid protrudes as a red swollen mass in the lower eye.

English bulldogs were also at 24.32 times greater risk of mandibular prognathism, where the lower jaw is too long relative to the upper jaw, and 19.2 times at risk of brachycephalic obstructive airway syndrome which can lead to severe breathing problems, compared to other dogs.

However, they were at reduced risk of some conditions such as dental disease, heart murmur and flea infestation compared to other dogs. 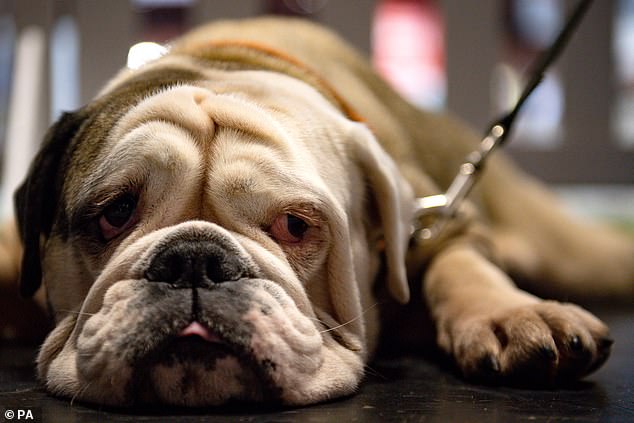 What is brachycephalic obstructive airway syndrome?

Brachycephalic obstructive airway syndrome (BOAS) is the term given to the effects that the shortened head of these animals has on the passage of air through the upper airways.

The signs can range from mild snoring to severe breathing problems.

Animals suffering from BOAS can struggle to breathe during exercise and even collapse due to lack of air.

The reliance of dogs on panting to cool themselves also makes animals suffering from BOAS very susceptible to overheating and developing potentially serious breathing difficulties in hot conditions.

They also found that only 9.7 per cent of English Bulldogs in this study were aged over eight years old compared to 25.4 per cent of other dog breeds.

This supports the view that a shorter lifespan in English Bulldogs is linked to their poorer overall health.

Dr Alison Skipper, co-author and veterinary historian, said: ‘Around 1900, some bulldog breeders were already concerned that the exaggeration of ‘certain typical points’ was ‘intensifying predispositions to disease’ and producing ‘cripples and deformities’ with ‘a sadly shortened duration of life’.

‘This new research provides strong evidence that modern bulldogs remain troubled by many diseases linked to their body shapes, most of which have been recognised for more than a century.

‘It confirms the need to follow the example of more responsible breeders who prioritise health in breeding decisions to improve the welfare of this popular and iconic breed in the future.’

The authors hope that in the future, the English Bulldog should become recognised and loved for having a longer face, smaller head and non-wrinkled skin, representing a more moderate and healthier conformation.

With an estimated 70 per cent of UK dogs not registered with The Kennel Club and only a tiny proportion (2 per cent) ever attending dog shows, the real power for change rests with the public who can demand and purchase only those types of dogs with moderate and healthier conformations.

Bill Lambert, Health, Welfare and Breeder Services Executive at The Kennel Club, said: ‘This research shows, there are increasing numbers of bulldogs bred outside any sphere of influence and in a certain way because it is perceived to be ‘cute’, with little regard for health and welfare.

‘This research, funded in part by The Kennel Club Charitable Trust, enables us and all those who care about improving bulldog health to understand more about these complicated issues.

‘Careful, responsible breeding can help address health problems and progress has been made to improve and protect bulldog health by those reputable breeders and caring owners who make use of evidence-based tools, like The Kennel Club/University of Cambridge Respiratory Function Grading Scheme.

‘A collaborative approach to tackling these issues is crucial; we must continue to work together with breeders, vets and welfare organisations to reduce and ultimately eliminate the health problems faced by brachycephalic breeds, as well as reduce mass demand for these dogs.’

The research has been published in the journal Canine Medicine and Genetics.

What your pedigree dog breed looked like centuries ago 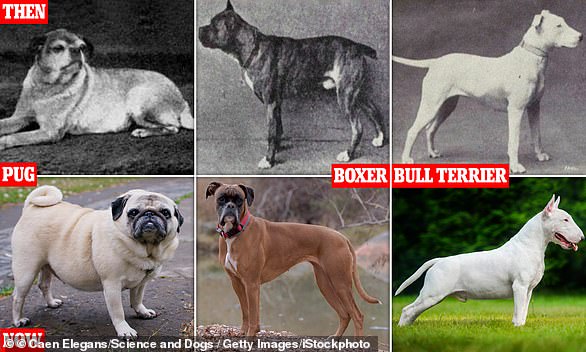 Shocking images have revealed what dogs used to look like, amid warnings that breeds like pugs and French bulldogs are being cruelly overbred for fashion.

From German Shepherds to Basset Hounds, many breeds have changed dramatically following years of selective breeding.

‘Most dog breeds were originally selected for particular purposes, such as hunting or guarding property,’ the RSPCA explains. ‘Humans selectively bred dogs that were best suited for the various roles required of them, based on their fitness, ability and utility.

‘Nowadays, in order to win dog shows, pedigree dogs have been bred to emphasise certain physical features in accordance with breed standards set by the Kennel Club. The dog who is judged to most closely match its breed standard is awarded the winner.

Boxers have been bred to have shorter faces with a larger mouth, while dachshunds’ backs and necks have stretched out and their legs have shrunk to a point that makes it difficult for them to manoeuver over obstacles a few inches off of the ground.

Meanwhile, pugs have been bred to have squashed noses and big eyes, which puts them at high risk for a range of health conditions, including breathing, eye and skin disorders, according to a new study.

‘The extreme characteristics many owners find so appealing, such as squashed faces, big eyes and curly tails, are seriously compromising pugs’ health and welfare and often result in a lifetime of suffering,’ explained Justine Shotton, British Veterinary Association (BVA) President.

‘While these extreme, unhealthy characteristics remain, we will continue to strongly recommend potential owners do not buy brachycephalic breeds such as pugs.’