Ten years after the Large Hadron Collider (LHC) enabled scientists to find the elusive ‘God particle’ or Higgs Boson, it was fired up once again, a third time, on 5 July, enabling the discovery of three ‘exotic particles’.

The world’s largest and most powerful particle collider at CERN, the European particle physics laboratory in Geneva, led to physicists finding a “pentaquark” and the first-ever pair of “tetraquarks”.

The LHC, re-ignited after three years in April, was cranked up to unprecedented levels of energy on 5 July, and has begun smashing together protons at almost the speed of light, which could throw up “new” physics beyond the Standard Model.

The current round of testing will run through 2026.

As the science world celebrates this discovery, we take a closer look at the run, what has been found so far and what does the discovery mean.

Before we dive deep into the discoveries, here’s a quick understanding of the LHC itself and who runs it.

CERN — Conseil Européen pour la Recherche Nucléaire— explains the Large Hadron Collider as a 27-kilometre ring of superconducting magnets with a number of accelerating structures that boost the energy of the particles along the way.

The LHC took around 10 years to build and the overall cost of the creation is said to have been around $4.75 billion.

CERN member countries fund the program, with just over 70 per cent of the annual budget given by Germany, the United Kingdom, Italy, France and Spain. Other contributors include the governments of the United States, India, and Russia, as well as various universities and other large organisations.

What did the new tests discover?

After over three years of upgrade and maintenance work, scientists at CERN fired up the LHC in July and on 5 July they identified “a new kind of “pentaquark” and the first-ever pair of “tetraquarks”, which includes a new type of tetraquark.

What’s are quarks, tetraquarks and pentaquarks?

Simply put, quarks are fundamental building blocks of matter. They are most commonly found inside protons and neutrons, the particles that make up the core of each atom in the universe.

Quarks usually combine together in groups of twos and threes to form hadrons such as the protons and neutrons that make up atomic nuclei.

But they can also combine into four-quark and five-quark particles, called tetraquarks and pentaquarks.

The LHC’s new discoveries are: a pentagon that contains a charm quark, a charm antiquark with an up and down quark, and the strange quark. It is the first one to include a strange quark.

The new pentaquark is made up of a charm quark and a charm antiquark and an up, a down and a strange quark. Image Courtesy: CERN

The second type, as per a CERN release, is a doubly electrically charged tetraquark. It is an open-charm tetraquark composed of a charm quark, a strange antiquark, and an up quark and a down antiquark. 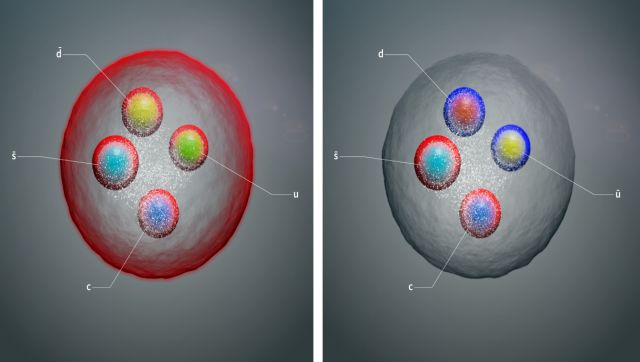 What does the discovery mean?

Chris Parks, the LHC spokesman, said, “Finding new types of tetraquarks and pentaquarks and measuring their properties will help theorists to develop a unified model of exotic hadrons, the exact nature of which is largely unknown,” before adding, “It will also help to better understand conventional hadrons.”

With inputs from agencies