Crows apologise to Betts over ‘disrespectful’ camp, North in a twist, McVeigh keen on GWS job

Adelaide chief executive Tim Silvers has publicly and privately apologised to Eddie Betts for the trauma the AFL great suffered during the Crows’ ill-fated pre-season camp.

Silvers spoke to reporters at the club’s West Lakes headquarters on Wednesday after bombshell revelations about the infamous 2018 training camp came to light with the release of Betts’ autobiography.

Silvers revealed he had texted Betts to apologise and expressed his hope the 350-game AFL legend and his family would one day feel comfortable enough to return to the club.

“We’ve got a leadership and a culture (now) that we’re driving that prioritises others and I think we can move forward, but we would like to say ‘Sorry’ to Eddie and anyone else who had a negative experience throughout the camp,” Silvers said.

“We’ve gone through an investigation through two different avenues, but we are sorry to anyone, any of our playing group, that had a negative experience because players’ welfare and well-being is paramount to our club.

“For someone like Eddie, who has left our club, to have a negative experience saddens me.”

Silvers, who addressed the playing group on the issue on Wednesday, hopes to speak with Betts on the phone later in the week.

An Indigenous icon and one of the AFL’s greatest small forwards, Betts claims the experience on the Gold Coast following the Crows’ shock 2017 grand-final loss was “weird” and “disrespectful”.

“I felt like I’d lost the drive to play footy, and to be honest, I’m not sure I ever had the same energy I did before that camp.”

Crows football director Mark Ricciuto addressed the issue on Triple M on Wednesday, with the club legend expressing his hope Betts would be able to move on from the distressing experience.

“It’s sad to hear Eddie write that because he’s been one of the greats of the football club,” Ricciuto said.

“I think the club’s been on record at times to say they acknowledge it wasn’t handled perfectly, it had all good intentions but it didn’t go perfectly.

“We all love Eddie and hopefully Eddie’s getting over that.

“That was four years ago, certainly the club has moved on from that and looking towards the future and have made a lot of ground since then.”

Eddie Betts during a team training session at the Adelaide Oval in 2017. (AAP Image/Tracey Nearmy)

Ricciuto is one of the few remaining senior off-field leaders from the period in question still involved at the club, with coach Don Pyke, chief executive Andrew Fagan and chairman Rob Chapman having left.

Silvers was asked if it was appropriate for Ricciuto to resign given Betts’ shock revelations.

“I don’t think it’s my place to speak about a director of our board,” he replied.

“What I will say about Mark is that he’s a passionate person who has delivered both on and off the field.”

Betts claimed he was dropped from the on-field leadership group after voicing his concerns about the cultural insensitivities he and fellow Indigenous players experienced at the camp.

Silvers said the club would investigate those fresh claims about the leadership structure further in coming days.

Betts played for the Crows until the end of 2019, before requesting a trade back to his original club Carlton and retiring last year.

A SafeWork SA investigation last year cleared Adelaide of breaching health and safety laws and an AFL investigation in October 2018 cleared the Crows of any rule breach.

Betts’ story even prompted Indigenous Australians Minister Linda Burney to speak out, saying “no one deserves to be treated” how the now-35-year-old was.

“Eddie’s distressing experience is an important reminder on why we need to do better at understanding & respecting Indigenous culture and traditions,” Burney tweeted.

North Melbourne are torn over whether to pick courageous midfielder Ben Cunnington in the AFL or ease him back into football through the reserves.

The Kangaroos veteran has not played since round 19, 2021 after battling testicular cancer. But Cunnington is set to finally be available to play this weekend in a major boost for the struggling club.

Caretaker North coach Leigh Adams is weighing up whether to bring Cunnington in for their AFL clash with the Sydney Swans at Marvel Stadium on Sunday, or ease him back via the VFL against the same opponents at Arden St.

The 31-year-old was tracking well to return last month before tweaking his calf at training, and last week tested positive for COVID-19.

“He has to get through main skills, then we’ll have the discussion with the performance team whether we think it’s best for him to have a run around in the twos for a week or bring him straight back in,” Adams said on Wednesday. “I’m pretty sure I know what his preference is and the coach’s preference, it will be just what’s best for his body going forward. 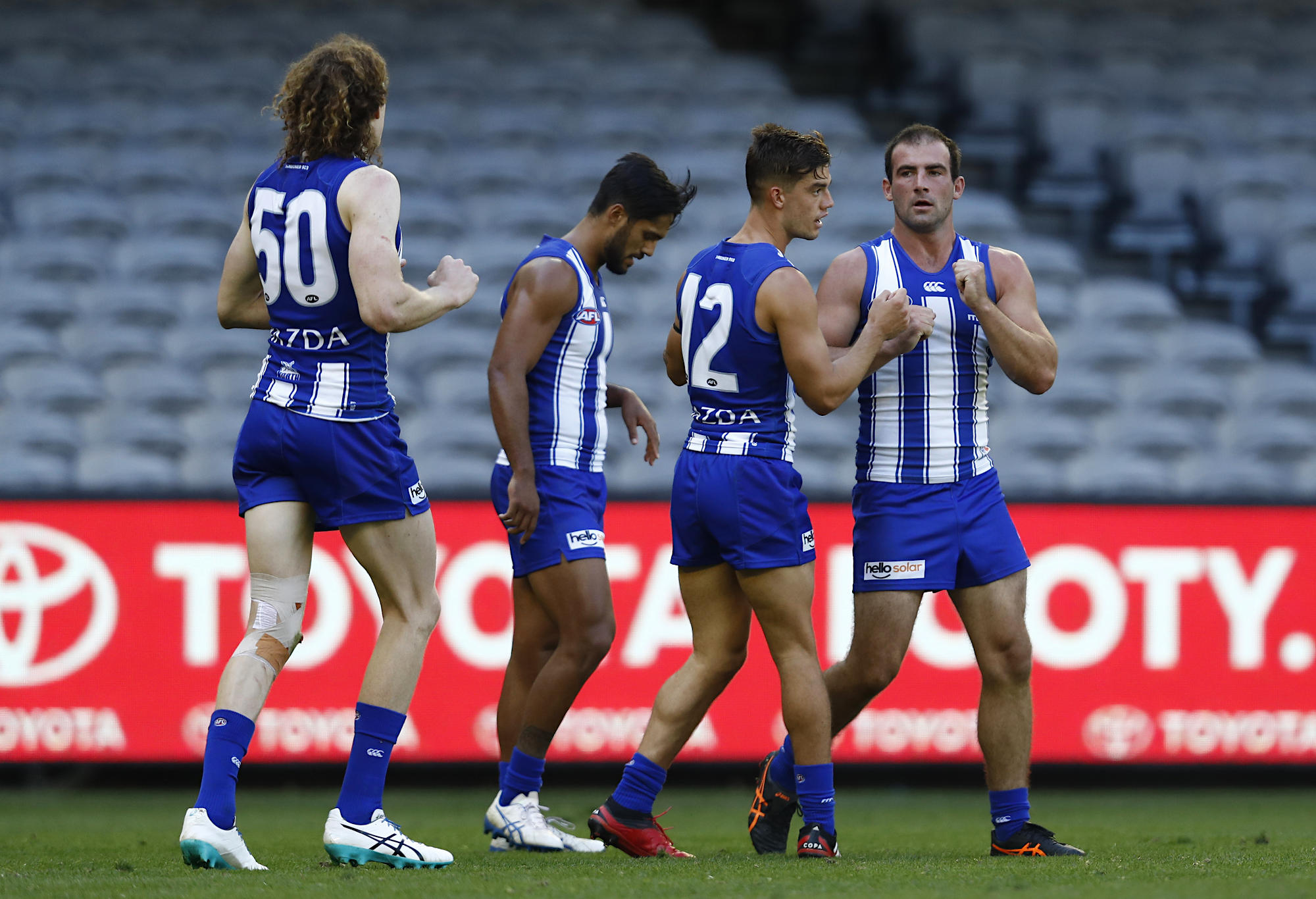 “At this time of year, it’s a great story for us and the motivation for the group and for the footy club.”

Adams admits the coaches face a tough decision but will be guided by the medical staff.

Cunnington was still one of the Kangaroos’ best midfielders before his cancer battle and he has been sorely missed by the club this season. He has played 227 games for North since being taken with pick five in the 2009 draft.

“The last thing we’d want to do is he breaks down and he’s out for the rest of the year,” Adams said.

“It’s probably going to be the VFL, even though we’d love it to be straight back in.

“Deep down I know he’d love to play seniors, particularly being a game in Melbourne this weekend and we travel next weekend.”

North sit bottom of the ladder with a 2-17 record heading into the final three games of the season.

The Kangaroos will remember their 1996 premiership victory on Sunday with club greats gathering to celebrate the famous grand final win over the Swans.

Interim coach Mark McVeigh has stated why he should be GWS coach full-time in the wake of his harsh criticisms of the team following their drubbuing in the Sydney derby.

McVeigh met with club chiefs on Tuesday for a job interview looking to score the job from 2023 onwards after taking over as caretaker midway through this season when Leon Cameron stepped down eight rounds into his ninth season at the helm.

He delivered a brutal assessment of Greater Western Sydney’s performance and called out a lack of effort from the majority of his players following their 73-point AFL thrashing by Sydney. 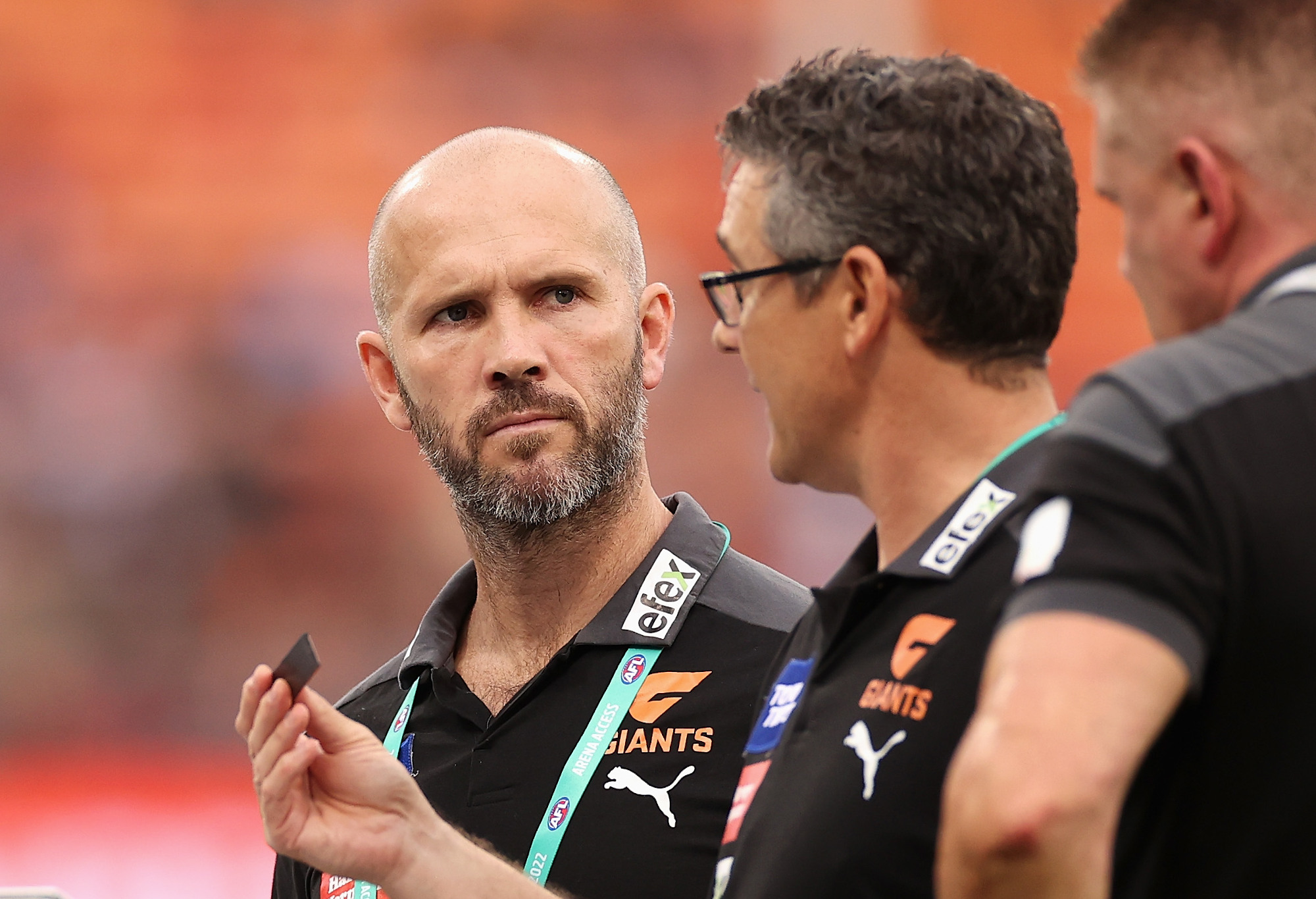 The Giants (5-14) were already out of finals contention heading into the derby and are in unfamiliar territory with little more than pride to play for in the remaining rounds.

“It’s extremely disappointing. It’s very unlike the Giants. These are the games that you have to get up for and our club has prided ourselves on that for a long period of time,” McVeigh said.

“There is just the unfortunate part of dealing with whether players have checked out or not, and that’s as honest as you possibly can be.

“If I look at the list, I reckon there was probably eight players that went to the wall today, you talk about (Josh) Kelly, (Lachie) Whitfield, (Harry) Perryman, (Sam) Taylor, (Callan) Ward, (Jesse) Hogan, (Toby) Greene and (Adam) Kennedy.

“I thought all of those eight players fought right through to the end and tried and gave absolutely everything. But eight players doing that, that’s not enough.”