With help from Derek Robertson

Meditation rooms were out, while pantsuits and gray hair were in at the D.C. Blockchain Summit on Wednesday.

Outside of Washington, crypto gatherings tend to come with a distinctive mix of new-agey utopianism and retail investor populism. Yesterday’s gathering — populated by lobbyists, wonks and finance executives— was testament to how quickly the traditional corporate world, especially its policy arm, has wedded itself to this new technology, too.

(Meanwhile, the venue, a building called the Capital Turnaround that was originally built for the cumbersome process of turning around streetcars, was testament to the creative ends to which you can repurpose obsolete infrastructure. Who knows what we’ll use bank vaults for in a hundred years.)

Despite the radical pronouncements that hardcore crypto evangelists are prone to making, the event showcased the ways in which the technology is increasingly being channeled into the more familiar framework of a well-heeled industry jostling with Washington regulators.

The conference was hosted by the Chamber of Digital Commerce, one of the handful of trade groups that has sprung up in this space, and the industry had a couple of things it really wanted to get off its chest.

For one thing, it is very unhappy with the SEC.

One frequent complaint from speakers was the agency’s reluctance to approve a spot Bitcoin ETF, which would make it far easier for retail investors to gain exposure to the cryptocurrency. Another was the agency’s “regulation by enforcement approach,” in which it waits for companies to run afoul of what it considers to be the law, then goes after them, rather than proactively drafting rules for cryptocurrency.

(In February, after the SEC fined trading platform BlockFi $50 million for failing to register an interest-bearing crypto lending product as a security, Matt Levine at Bloomberg wrote an essay saying the industry may just want to come to terms with the agency’s approach. In short, “Each time the SEC says you broke the law, you get a little more information about what the law is, and each time you negotiate a settlement, you get an opportunity to influence the law. This is expensive, but maybe it works?”)

The other talking point that industry speakers really wanted Washington to hear was that if the U.S. does not make itself welcoming to blockchain technologies, the industry will just go somewhere else — as some entrepreneurs already have.

Policymakers got their say, too, though the crypto-skeptical ones weighed in from outside the hall. Not long after the conclusion of a panel featuring SEC commissioner Hester Pierce — a Donald Trump appointee who agreed with many of the moderator’s gripes about the commission — SEC chairman Gary Gensler tweeted about the importance of preventing the use of crypto to evade existing securities laws.

Joining the conference via pre-taped video, Rep. Stephen Lynch (D-Mass.), brought up “red flags” like the implosion of the stablecoin Terra, expressed skepticism that crypto was helping underserved populations and talked up the need for the government to step in with a digital dollar.

But appearances by four crypto-friendly senators, Democrats Cory Booker and Kirsten Gillibrand along with Republicans Cynthia Lummis and Steve Daines, were another sign that Washington’s accommodation of crypto is proceeding apace.

In fact, judging by the saturation level of crypto events in the capital this week, Washington is doing more than just accommodating blockchain.

Today and tomorrow, the Mayflower Hotel is hosting the Blockchain and Sustainable Economic Growth conference, featuring policymakers from around the world.

It isn’t like Heritage, whose name and mission suggest the preservation of old ways, to embrace the newfangled, but the group’s president, Kevin Roberts held Bitcoin up as a tool of freedom against “centrally planned currencies.” It’s a sign of just how far enthusiasm for Bitcoin has spread in the Republican Party — from its original libertarian backers all the way into the GOP’s most conservative bastions.

In 2020, TSMC announced its intention to invest billions to build a 5-nanometer semiconductor fab in Arizona, U.S.A. When operational in 2024, this will be the most advanced chip-manufacturing process technology on U.S. soil, creating 2000 direct jobs and thousands of indirect jobs. This fab construction has also driven investment in the U.S. from leading semiconductor suppliers, bringing new strengths to the US semiconductor supply chain and contributing greatly to U.S. semiconductor industry growth.

Facebook’s status as a global institution means that when it decides to take something seriously, so do the Davos attendees of the world.

And so it is this at this week’s World Economic Forum, which includes two (two!) metaverse-specific panels: “Shaping a Shared Future: Making the Metaverse” and “The Possibilities of the Metaverse.”

The former, held earlier today, featured Meta’s chief product officer Chris Cox and Second Life inventor Philip Rosedale, who got into a gentle tiff when moderator Andrew Sorkin prodded them about what the business model should look like for the virtual next iteration of the internet.

“If we use [advertising-based] models, which rely on making predictions about what you want, and suggesting things to you, and in some cases I think manipulating your behavior, I think it’s a terrible risk,” Rosedale said. “The model that has to work in the metaverse, in my opinion, is a transaction or fees model.”

Cox rebutted him with the usual explanation for the now-much-criticized, ad-based model that powers companies like Meta and Google, saying it’s the only way to create free services at a massive scale.

That wasn’t the only area where the panelists tussled over the new rules of the road. When Sorkin moved to the question of governance in a sprawling virtual environment, it wasn’t clear how centralized the metaverse’s architects might want it to be.

“There needs to be a conversation at the level of the United Nations, or the ITU, or other non-governmental bodies where a certain standard is set,” said Omar Sultan Al Olama, a UAE minister of state.

Meta’s Cox concurred with the need to have some governing body to prevent against the most egregious harms, but echoed Nick Clegg’sMedium post from last week in cautioning that a truly expansive, interoperable virtual world might be even more difficult to govern than our current internet.

“We’re already managing, as are most internet companies, the reality that you want companies to have their own community standards and to define their own rules… but also to recognize that exists in tension with national laws, and in some cases, as we’re beginning to see, state laws,” Cox said. “There are tensions on both sides.” — Derek Robertson

It’s all fun and games until the lawyers get involved.

An irresistibly bizarre report yesterday on the theft of actor Seth Green’s Bored Ape Yacht Club NFT — and potentially with it, the rights to a planned animated series featuring said “bored ape” — inspired not just schadenfreude, but a parade of lawyers weighing in on the extent to which real-life property law, intellectual and otherwise, intersects with the NFT world.

The answer: Contrary to the axiom, code is not necessarily law.

Green’s Bored Ape NFT, a digital asset worth more than $200,000, was stolen by some unknown party — raising the question of whether Green or the person to whom the thief promptly sold the token would control the right to using it in a show.

NFT copyright law is currently ambiguous. What is clear, however, is that as K&L Gates partner and NYU Stern adjunct Drew Hinkes tweeted, “digital assets give you system powers, not legal rights. Legal rights come from law.”

I called Hinkes and asked him to elaborate on the thorny nature of NFT rights, and how they compare to our already-existing framework for legal property.

In other words, the NFT as an “object” and the right to use it are two separate entities, with their own rights attached.

That’s probably good news for Green. Of course, this is all barring the notion that said “theft” isn’t actually just an elaborate promotion for the animated series in question. As with so many other things in the world of Web3, there’s a thin line between technological innovation and rank self-promotion. — Derek Robertson 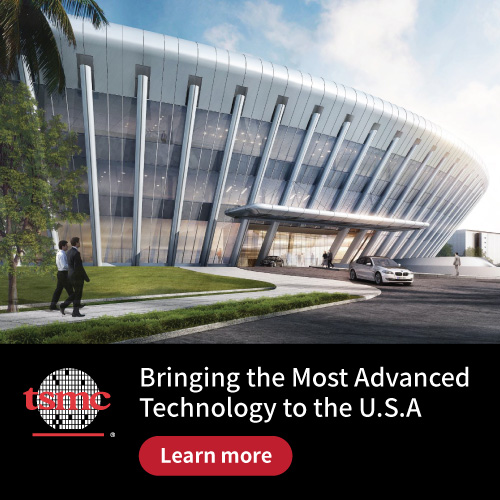 Ben Schreckinger covers tech, finance and politics for POLITICO; he is an investor in cryptocurrency.

Two years ago, TSMC announced its intention to invest billions to build a 5-nanometer semiconductor fab in Arizona, U.S.A. Just over a year ago, TSMC broke ground on the project and continues to make great progress. When operational in 2024, this will be the most advanced chip-manufacturing process technology on U.S. soil. Over 500 TSMC Arizona employees are currently training on the most advanced chip-making equipment in Taiwan in preparation for the opening and will return to the U.S. with new state-of-the-art skills. In total, the new fab will create 2000 direct jobs and thousands of indirect jobs. TSMC’s Arizona fab has also driven investment in the U.S. from leading semiconductor suppliers. Some are starting their first U.S. operations in Arizona, and others are expanding their local operations. They bring new strengths to the US semiconductor supply chain and will contribute greatly to U.S. semiconductor industry growth.