Dozens arrested after days of far-right clashes across Sweden 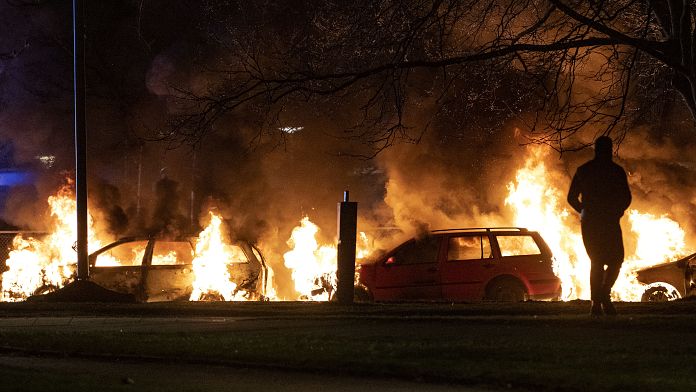 Sweden says it will respond in a “tough” way after violent clashes over the weekend at a far-right rally.

Unrest broke out in the south of the country late on Saturday after demonstrators threatened to burn copies of the Qur’an during the holy Muslim month of Ramadan.

At least 40 people — including 26 police officers — have been injured in recent days, while two dozen people have been arrested.

Swedish police had moved one rally to a new location as a preventative measure, but clashes were still reported in the town of Landskrona.

Up to 100 mostly young people threw stones at police, set cars, tires and dustbins on fire, and put up a barrier fence that obstructed traffic, authorities said.

The situation had calmed down in the town by late Saturday but remained tense, police said, adding no injuries were reported.

The rally in question had been organised by the Danish anti-immigration Stram Kurs party and its leader Rasmus Paludan.

Regional police spokeswoman Kim Hild had said that officers would not revoke permission for the Landskrona demonstration due to a high free speech threshold.

The right of the protesters “to demonstrate and speak outweighs enormously, heavily and it takes an incredible amount for this to be ignored,” Hild told Swedish news agency TT.

Since Thursday, clashes have been reported also in Stockholm and in the cities of Linkoping and Norrkoping — all locations where Stram Kurs either planned or held demonstrations.

Paludan said on the party’s Facebook page that he decided to cancel some demonstrations on Sunday because the Swedish authorities in the region have “shown that they are completely incapable of protecting themselves and me”.

“If I was seriously injured or killed due to the inadequacy of the police authority, then it would be very sad for Swedes, Danes and other northerners,” he wrote.

The far-right rallies in Sweden have sparked condemnation from Muslim countries, including Iran, Iraq, and Saudi Arabia.

Iraq’s foreign ministry said it had summoned the Swedish ambassador to protest against “provocations of the feelings of Muslims and offence to their sacredness”.

The ministry also warned that the incidents could have “serious repercussions” for relations between Stockholm and Arab countries.