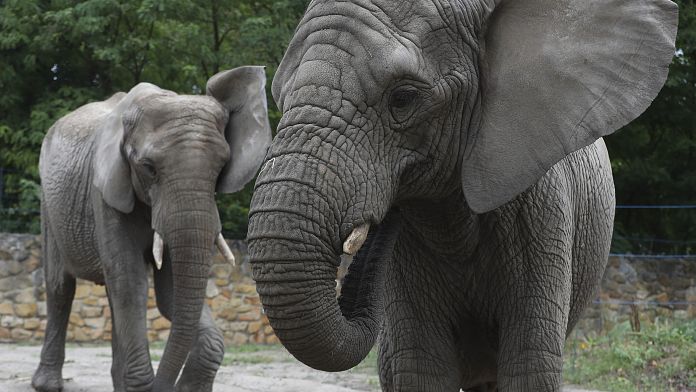 Elephants are totally unsuitable for keeping in zoos where they suffer long-term psychological damage, according to wildlife experts cited in a wide-ranging study of the plight of captive animals in Europe and North America.

the report “Elephants in zoos: a legacy of shame” published Wednesday by the Born Free Foundation, it provides details on numerous cases in which animals in the herd have died young or suffered in captivity.

He says there were 580 elephants in European zoos in 2021 – about half of the global total – and calls for the practice of keeping them in such places to be phased out.

The Wildlife Conservation Charity is also calling for an end to capturing wild elephants for export to zoos and an end to breeding attempts by those kept in captivity.

He recommends a series of steps, with an action plan to improve the lives of existing captive elephants, including possible relocation “to wild or near-wild environments.”

Among elephants kept in UK zoos, the foundation says 40% of babies die before age five, and elephants born in captivity have an average lifespan of just over 20 years compared to 50 years in the wild.

The Born Free Foundation describes elephants as “highly intelligent and social animals” that in the wild “wandered across vast ranges and live up to 70 years in complex multigenerational families and societies.”

Conversely, zoos cannot mimic wild habitats or reproduce the conditions that allow them to thrive, he adds.

“It is a horrifying fact that most elephants in European and North American zoos develop and exhibit abnormal stereotypical behaviors, such as compulsive rocking and swinging, as a result of long-term psychological damage.”

The report says that although the relationship between elephants and people goes back millennia, understanding of animals’ “social and cultural complexity” and “considerable physical suffering and psychological distress in captivity” is much more recent.

The Born Free Foundation takes its name from the 1966 film “Born Free” which told the story of the successful rehabilitation of a young lioness in the wild.

Yet co-founder and executive chairman Will Travers, whose parents starred in the film, says the charity was created following the death of a young female African elephant at London Zoo in 1983.

The elephant, named Pole Pole, was sent as a gift from Kenya after appearing in a movie with his parents. When they visited her a decade later, “mutual recognition was evident as she reached across the moat with her trunk to touch their outstretched hands,” notes Travers in the report’s introduction.

But it was evident that the elephant was adapting badly to captivity: “now living alone, it had become difficult to manage and potentially dangerous”.

Injured after attempting to move to another UK zoo, Pole Pole was put down.

Travers says the individual stories are supported by “an avalanche of data and analysis” showing that attempts to raise and keep elephants in captivity have failed – and he says attempts to improve social conditions or increase pen size are misplaced.

“We’ve been tinkering around the edges long enough, and smaller steps aren’t the answer. Elephants don’t belong in zoos,” he concludes.