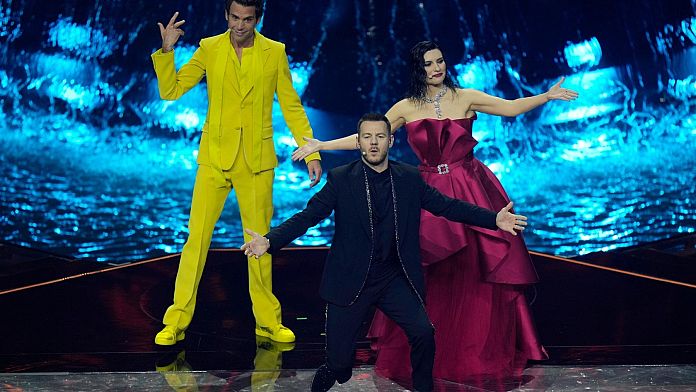 This year Eurovision music competition in Italy it is bringing joy and music to living rooms across the continent just when it is most needed, in the midst of a devastating war in Ukraine and a cost of living crisis.

The final will take place on Saturday, broadcast live all over the world from the PalaOlumpic Arena in the northern city of Turin.

So which countries are hitting the high notes in this year’s competition? The bookmakers have reduced the odds on these five acts:

In a highly politicized competition like Eurovision, it’s no surprise that Ukraine’s entry has emerged as a favorite of bookmakers, with a whopping 8/13 odds.

The voice of this year’s Ukrainian Eurovision is a hymn to motherly love by the folk-rap group Kalush Orchestra, called Stefania (a tribute to frontman Oleh Psiuk’s mother).

Members of the Kalush Orchestra said they wanted to “lift the spirits” with their song, especially as members of the group – including dancer Vlad Kurochka – volunteered to stay in Ukraine and fight in the war.

The UK has been accused of having rarely taken the competition seriously in recent decades and a string of disastrous results culminated with last year’s entry having the dreaded zero points both by international juries and by the voting public.

But this year the UK appears to have turned things around with world famous social media star Sam Ryder who could reverse the nation’s Eurovision woes, with 8/1 winning odds.

And the singer already has a huge online presence with 12.4 million followers on TikTok and 3.4 million on Instagram.

Sweden is a Eurovision powerhouse with six wins over the decades and most of the top five achievements of any country in the 21st century.

So could Sweden win again this year? According to bookmakers, he has a good chance of claiming first place once again, ranked as having the third best odds.

Representing the country is Cornelia Jakobs, with her essential electro-pop breakup ballad “Hold Me Closer.

Music critics have praised his lyrics and musical direction as a refreshing change from the country’s usually highly refined voices.

Mahmood is now a Eurovision veteran, having finished second in 2019 with his Arab pop hit Soldi (Money) – which winked at his Egyptian heritage – which had already taken the European charts by storm.

It garnered 193 million views on YouTube and even sparked the ire of far-right Italian leader Matteo Salvini.

This year, the 29-year-old soulster will share the Eurovision stage with pop-rap sensational teen Blanco, whose rapid rise to stardom came after he and Mahmood won Italy’s Sanremo Festival for their song and vocals. current, Chills (Shivers).

The ballad’s spatial trip-hop sound and straightforward lyrical depiction of love’s vulnerability made it a popular pick and contender for first place.

The song has already amassed more than 55 million views on YouTube, climbed the Italian and Swiss charts, and broke the Swiss record for most Spotify streams in one day.

Coming fifth among bookmakers, Spaniard Chanel has emerged as one of this year’s Eurovision favorites.

His reggaeton hit SloMo is probably the liveliest and most upbeat of the voices listed here.

He saw the Cuban-born actress and singer, former support dancer of Colombian superstar Shakira, show off her dance moves on stage.

The song was particularly popular on social media, where fans express their support using the mango emoji.

Given Spain’s poor finish in last year’s competition – coming in second from bottom – fans are pinning their hopes on Chanel’s entry to turn things around.

Who will you vote for?