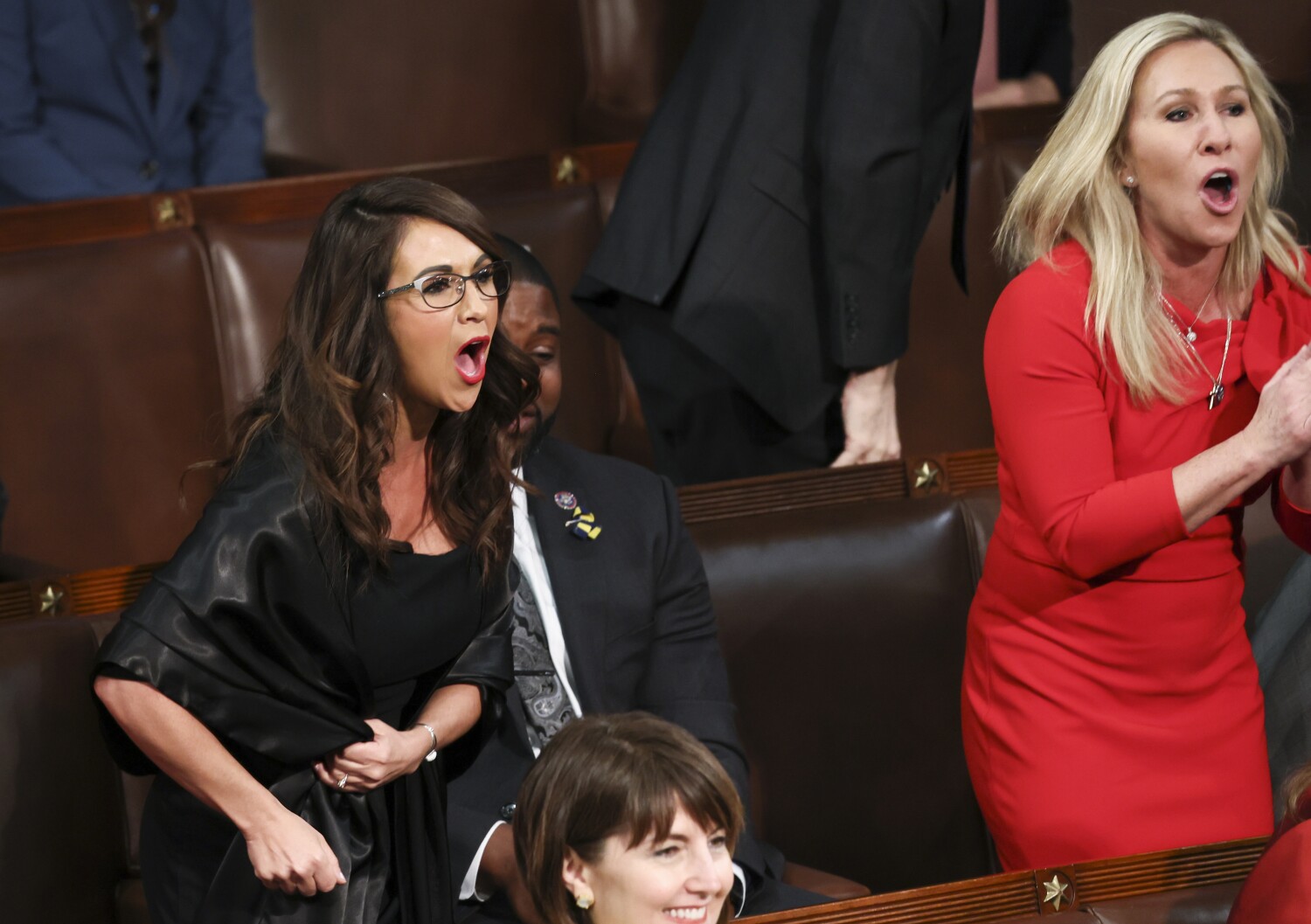 For the second time in two weeks, GOP lawmakers have found themselves the targets of outlandish, evidence-free attacks — lobbed by fellow Republicans.

Then, freshman Rep. Marjorie Taylor Greene, a perpetual GOP firebrand from Georgia, smeared three Republican senators as “pro-pedophile” in a tweet Monday evening because they have said they intend to support Judge Ketanji Brown Jackson‘s confirmation to the Supreme Court.

Jackson’s Republican detractors — lobbing charges debunked by judges and commentators across the political spectrum — have accused her of handing down lenient sentences in cases involving images of child sexual abuse. Those accusations, critics and the White House have noted, echo an obsession of QAnon conspiracy theorists.

Increasingly, conservatives are lobbing incendiary and unsubstantiated charges that their political opponents — namely, Democrats — are aligned with predators. But Cawthorn‘s and Green’s comments offer a new twist, with newer GOP politicians harnessing sensationalized rhetoric and nodding at right-wing conspiracy theories to harm members of their own party.

“When I was at [the Republican National Committee] in 2012, if one Republican had said another was a pedophile sympathizer, that would’ve been unimaginable,” said Tim Miller, a former RNC spokesman who has since left the party and now writes for the Bulwark, a center-right website.

Sen. Susan Collins (R-Maine) laughed Tuesday when asked to respond to Greene’s Twitter attack, which targeted her along with fellow Republican Sens. Mitt Romney of Utah and Lisa Murkowski of Alaska for backing Jackson. A vote by the full Senate to confirm Jackson to the Supreme Court is expected by the end of this week.

“Obviously, I don’t think that’s a healthy dialogue,” Collins said. “She obviously can say whatever she wishes, but that’s clearly ludicrous and sadly typical of what I expect of her.”

Collins’ reaction was typical of many Republicans, who treated Greene’s comment as an irritant rather than a major outrage.

“Very inappropriate,” Sen. Lindsey Graham (R-S.C.) said in a brief condemnation. Asked whether House GOP leaders should admonish Greene, his response was noncommittal: “It’s a free country. You can say outrageous things if you want to; but it’s very inappropriate.”

Since joining Congress in 2021, Greene has consistently courted controversy. Despite having been booted off House committees by Democrats and a handful of Republicans for provocative social media posts, she has not toned down her combative posture and norms-defying behavior. She called a fellow Republican congresswoman “trash,” heckled President Biden during his State of the Union address, and appeared at a conference held by white nationalists. She later claimed she didn’t know the group leader’s racist views, but was unapologetic for speaking before the audience.

The relatively muted reaction to Greene on Capitol Hill starkly contrasted with the fallout for Cawthorn for claiming on a podcast that members were using illegal drugs and holding sex parties. Fellow Republicans complained they could be implicated in the salacious assertions, for which Cawthorn offered no evidence. McCarthy, after giving Cawthorn a private talking-to, told reporters that the 26-year-old lawmaker had “lost my trust.”

Cawthorn followed with a statement that defiantly insisted “corruption and unethical activities exist in Washington,” but said it was the news media and the left, not his original comments, that were disparaging his Republican colleagues.

Political mudslinging is nothing new. As early as 1800, the presidential race between John Adams and Thomas Jefferson featured the founding fathers trading over-the-top character assassinations.

But Greene’s and Cawthorn’s insinuations of depravity stand out, because the targets are fellow members of their political party and the claims occurred outside the context of an election. And while negative campaigning can sometimes help inform voters, Geer said, that’s only the case when the attacks are anchored with some kind of evidence.

“People are making up an alternative reality and playing to that,” Geer said. “That’s a serious problem.”

Observers say there is another troubling element in the two Republicans’ rhetoric — the emphasis on sexual deviancy, which is a fixation of believers in QAnon, an amorphous conspiracy theory that alleges a cabal of Democrats and elites are part of a widespread effort to traffic children.

“They’re pandering to the base and specifically to white suburban women who responded to QAnon content very strongly in the run-up to the presidential election,” said Sophia Moskalenko, a psychologist who specializes in radicalization and extremism.

The conspiracy theory became especially popular during the pandemic, capitalizing on increasing distrust in institutions and widespread anxiety, especially among parents trying to keep their children safe, Moskalenko said. Republicans’ focus on pedophilia and sexual immorality can serve as a signal to believers of the conspiracy, she said.

“It’s a dog whistle or a revamping of the storyline that faded a little bit from the public consciousness,” said Moskalenko, co-author of “Pastels and Pedophiles: Inside the Mind of QAnon.”

The theme has exploded among conservatives in recent days, particularly after GOP Gov. Ron DeSantis of Florida signed legislation prohibiting classroom instruction on gender identity or sexual orientation for students in kindergarten through third grade. Opponents say the measure, which they call the “Don’t Say Gay” bill, is overly broad and could end up harming LGBTQ youth. Supporters of the measure have called it an “anti-grooming bill” and labeled those who critique it as “groomers,” harking back to a homophobic trope.

Lately, activists have turned their ire to the Disney Co., which eventually opposed the legislation.

But Miller, the former RNC official, said Greene‘s and Cawthorn’s comments show the trope can also be another weapon in the GOP civil war, in which loyalists of former President Trump battle other Republicans they see as insufficiently aligned with the “Make America Great Again” movement.

Miller noted that Republican Rep. Fred Upton of Michigan had announced Tuesday that he intended to retire. Upton is the fourth GOP lawmaker who voted to impeach Trump last year to say they won’t seek reelection.

“Their attempt to purge non-MAGA Republicans is working,” Miller said.

Mason reported from Los Angeles and McCaskill from Washington.