Scott Morrison continues to struggle to emphasize his messages of strong economy and national security, as the latest data from Isentia’s Campaign Insights show.

With the campaign almost completely dominated by cost of living and interest rates – these two issues absorbed more hedging than the other issues combined – Morrison was left on the defensive for much of the week.

The next two problems – the launch of the Labor campaign and climate change – were also not winners for Morrison. After dominating coverage in the week that Anthony Albanese was isolated from COVID, Morrison’s share of coverage returned to near par and was naturally dominated by economic issues, but not in a good way for the government.

Albanese also benefited from a successful campaign launch in Perth, which also showcased his team. Opposition Treasury spokesman Jim Chalmers stepped forward as the most important figure in the campaign after the leaders, gaining nearly a quarter more coverage than his counterpart Josh Frydenberg. 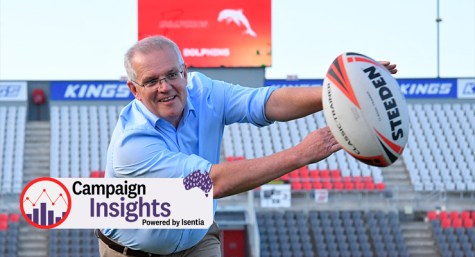 This week’s Chalmers-Frydenberg debate ran similarly to the Albanian-Morrison debate, meaning it wasn’t much of a debate, because the participants refused to talk about the same issues. Chalmers focused on Labor’s strong issues – the cost of living, the waste and disfigurement of public funds and wage stagnation – while Frydenberg talked about low unemployment, low taxes (ironically, presumably) and economic shock. Neither has spent much time on climate change or energy policy.

Isentia’s data shows what a contrast in styles the campaigns are, with Morrison practically a one-man band, most notably with Frydenberg engaged in a deadly fight with Monique Ryan in Kooyong. Labor, by contrast, also had Jason Clare receiving extensive coverage, as did Richard Marles and Kristina Keneally (Labor’s strong front-row lineup, however, is inexplicably described as negative by some reporters).

In the battle of the fringes, Isentia data shows that Jo Dyer in Boothby got a huge percentage of coverage in that place as the Coalition and News Corp’s panic attacks on independents continue to escalate, but Dyer’s success in the ‘avoiding the trap s.44 has brought a lot of mentions. Scott Morrison’s repeated visits to Parramatta have helped strengthen Liberal candidate Maria Kovacic’s coverage of Andrew Charlton of Labor.

In Kooyong, Monique Ryan has consistently had about 35-40% coverage in that seat since the campaign began – in future elections, Coalition and News Corp may wonder if their relentless and absurd attacks on independents aren’t simply giving oxygen to the candidates and the recognition of the name that will help them on voting day.

At Wentworth, Allegraspender, which also maintained a fairly constant level of coverage, fell below 40%, but much of the coverage by liberal Dave Sharma referred to his preference for climate denier Clive Palmer’s UAP.