— Mortgage applications increased 1.2 percent from one
week earlier, according to data from the Mortgage Bankers Association’s (MBA) Weekly Mortgage
Applications Survey for the week ending July 29, 2022.

“Mortgage rates declined last week following another announcement of tighter monetary policy from the
Federal Reserve, with the likelihood of more rate hikes to come. Treasury yields dropped as a result, as
investors continue to expect a weaker macroeconomic environment in the coming months. The 30-year
fixed rate saw the largest weekly decline since 2020, falling 31 basis points to 5.43 percent,” said Joel
Kan, MBA’s Associate Vice President of Economic and Industry Forecasting. “The drop in rates led to
increases in both refinance and purchase applications, but compared to a year ago, activity is still
depressed. Lower mortgage rates, combined with signs of more inventory coming to the market, could
lead to a rebound in purchase activity.”
…
The average contract interest rate for 30-year fixed-rate mortgages with conforming loan balances
($647,200 or less) decreased to 5.43 percent from 5.74 percent, with points increasing to 0.65 from 0.61
(including the origination fee) for 80 percent loan-to-value ratio (LTV) loans.
emphasis added

The first graph shows the refinance index since 1990.

With higher mortgage rates, the refinance index has declined sharply over the last several months.

The refinance index is just above the lowest level since the year 2000. 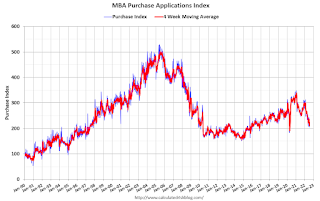 According to the MBA, purchase activity is down 16% year-over-year unadjusted.
The purchase index is now only 14% above the pandemic low.

Note: Red is a four-week average (blue is weekly).