Mortgage applications increased 2.5 percent from one week
earlier, according to data from the Mortgage Bankers Association’s (MBA) Weekly Mortgage Applications
Survey for the week ending April 29, 2022.

“Treasury yields eased slightly last week but remained close to 2018 highs, as financial markets await the
news from the Federal Reserve on its latest plans for rate hikes and reducing its balance sheet holdings.
The 30-year fixed rate was 5.36 percent, up over two percentage points from a year ago. The 127-basis point jump in rates over the past two months has triggered a 49 percent drop in refinance activity,” said
Joel Kan, MBA’s Associate Vice President of Economic and Industry Forecasting. “Purchase applications
increased for conventional, FHA, and VA loans and were up 4 percent overall. This is potentially a good
sign for the spring home buying season, which has seen a slow start thus far. The purchase market
remains challenged by low levels of housing inventory and rapid home-price gains, as well as the
affordability hit from higher mortgage rates that are forcing prospective buyers to factor in higher monthly
payments. The ARM share remained unchanged at around 9 percent, which is well below the 30 percent
mark observed in the mid-2000s.”
…
The average contract interest rate for 30-year fixed-rate mortgages with conforming loan balances
($647,200 or less) decreased to 5.36 percent from 5.37 percent, with points decreasing to 0.63 from 0.67
(including the origination fee) for 80 percent loan-to-value ratio (LTV) loans.
emphasis added

The first graph shows the refinance index since 1990.

With higher mortgage rates, the refinance index has declined sharply over the last several months.

The refinance index just above last week, and that was the lowest level since December 2018. 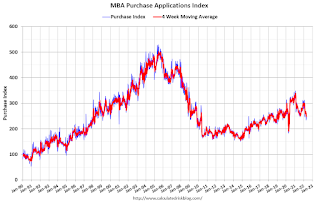 According to the MBA, purchase activity is down 11% year-over-year unadjusted.

Note: Red is a four-week average (blue is weekly).