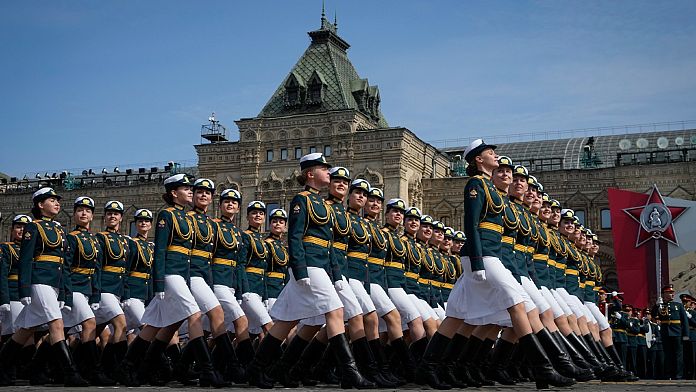 Russian President Vladimir Putin has tried to define Moscow’s military action in Ukraine as a forced response to Western policies.

It came as Russia scored Victory Day Monday with a special military parade in Moscow.

The day commemorates the Soviet Union’s victory over Nazi Germany in World War II and comes in the midst of the Russian invasion of Ukraine.

In his speech, Putin said the campaign in Ukraine was a timely and necessary move to avert what he described as “an absolutely unacceptable threat right next to our borders”.

The Russian leader’s message was in line with a coherent narrative from Moscow and repeated by the Kremlin-controlled state media: that Russia is responding to a perceived threat from the West, and particularly from NATO.

“The danger was growing,” Putin said, adding that “Russia preemptively repelled an aggression” in what he described as a “forced, timely and only correct decision by a sovereign, powerful and independent country. “.

The Russian leader reprimanded the West for not heeding Russian calls for security guarantees and a return to NATO expansion, arguing that he left Moscow with no choice but to take action in Ukraine.

“In December last year we proposed the conclusion of an agreement on security guarantees. Russia invited the West to enter into an honest dialogue, seeking reasonable compromise solutions, to take into account mutual interests. It was all in vain. “.

He went on to say that preparations were underway “for the invasion of our historic lands” such as Donbas and Crimea, falsely claimed that Kiev was trying to acquire nuclear weapons and claimed that NATO had begun to “actively take the military control “of neighboring territories, with” strengthened “military infrastructure and advisers and weapons sent.

“(The level of) danger was increasing every day. Russia preemptively repelled the aggressor. It was necessary, timely and … just. The decision of a sovereign, strong and independent country.”

Putin’s earlier claims to this effect have been denied by Kiev – which posed no military threat to Moscow – and the West. Many of Russia’s neighbors have freely chosen or asked to join NATO to counter the threat from Russia, which has launched wars in Chechnya, Georgia and now Ukraine since Putin came to power.

Comparisons with the Second World War

Putin said Russian troops were fighting for the country’s security in Ukraine and observed a minute’s silence to honor the troops who fell in combat. Putin noted that some of the troops who took part in the parade have already fought in Ukraine.

He drew parallels between the Red Army’s struggle against Nazi troops and the action of Russian forces in Ukraine.

“Now I turn to our armed forces and the Donbass. You are fighting for the Fatherland, for its future, so that no one forgets the lessons of the Second World War. So that there is no volunteer place in the world for executioners, punishers and Nazis, “Putin said.

The claim that Russia is taking action to rid Ukraine of the “Nazis”, often repeated by Russian leaders, is ridiculed in the West and in Ukraine, where the far-right presence is marginal at best. Kiev has accused Moscow of using Nazi-style tactics in Ukraine, and investigations are clandestine nationally and internationally into multiple allegations of war crimes and other atrocities committed by Russian forces.

Speaking ahead of the Moscow military parade, Ukraine’s President Volodymyr Zelenskyy said Ukraine would not allow Russia to “take possession of the victory over Nazism” in 1945.

“We are proud of our predecessors who, together with other peoples in the anti-Hitler coalition, defeated Nazism. We will not allow anyone to annex this victory, to appropriate it,” he said.

No major announcements from Putin

Despite fears that the Russian president’s Monday speech could mark the beginning of another escalation of fighting in Ukraine, with potential general mobilization or a formal declaration of war, the speech passed without major new announcements.

Many commentators had claimed that Vladimir Putin would have liked to declare a significant victory in Ukraine, or at least part of the country.

But not only did the swift victory that Moscow is thought to have foreseen failed to materialize, but Russian forces were forced into a humiliating withdrawal from the Kiev region and the north.

Despite the clustering to the east and the continued attack to the south, progress on the ground has only been incremental.

“They have nothing to celebrate,” Linda Thomas-Greenfield, US ambassador to the United Nations, said of the Russians on CNN.

“They failed to defeat the Ukrainians. They failed to divide the world or divide NATO. And they have only managed to isolate themselves internationally and become a pariah state all over the world ”.

The Russian leadership is also said to have been surprised by the strength of the reaction to Ukraine’s invasion of the West, which imposed unprecedented sanctions on Moscow.