Recession Talk: US and Euro Area

We see the risk that the economy enters a recession in the next year at 30% in the US, 40% in the Euro area, and 45% in the UK. … Our subjective recession probabilities are significantly higher than the average 15% annual unconditional probability of advanced economies to enter a recession since the 1960s.

There was a recession in what was to become the Euro area, in the early 1990’s, and another recession in the Euro area in 2011-12. Interestingly, the CEPR_EABCN EABCDC November 21, 2021 announcement makes the following observation regarding the two quarters of negative growth:

the two quarters of negative GDP growth in 2020Q4 and 2021Q1 are judged, based on available data, to be part of the unsteady expansion that started after 2020Q2. A sui generis recovery is following a sui generis recession.

Which is germane to the utility of the two consecutive quarter negative growth rule-of-thumb that many people refer to.

So there have been two recessions not coincident with US recessions.

A comparison of US and Euro Area GDP Q/Q annualized is shown in Figure 2. 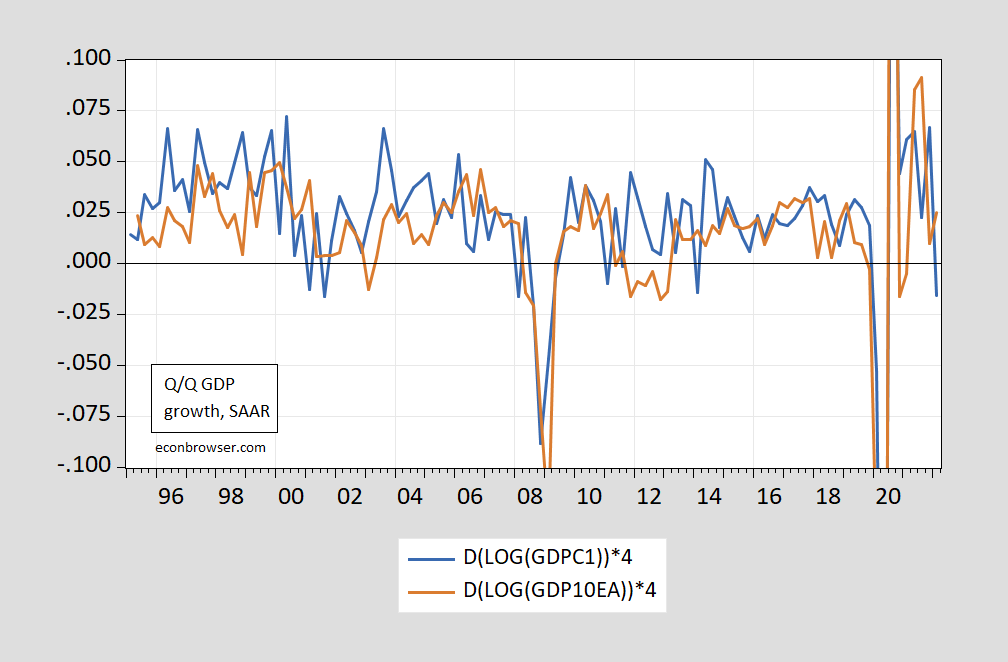 Over the period 1995-2019, the correlation of Q/Q growth rates is about 0.28; a one percentage change in US growth is associated with a 0.54 percentage point change in Euro area growth. Hence, it’s possible for Q/Q growth can diverge.

The June release for EuroCOIN, which is supposed to represent a smoothed monthly GDP q/q growth rate for the Euro area reads at 0.88% not annualized (hence, about 3.6% annualized. 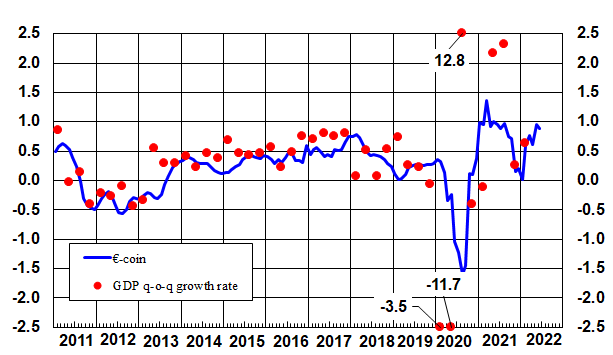 This GS recession probability for the US is slightly less than that reported by Bloomberg today (38%), but certainly higher than plain vanilla term spread models (see here).