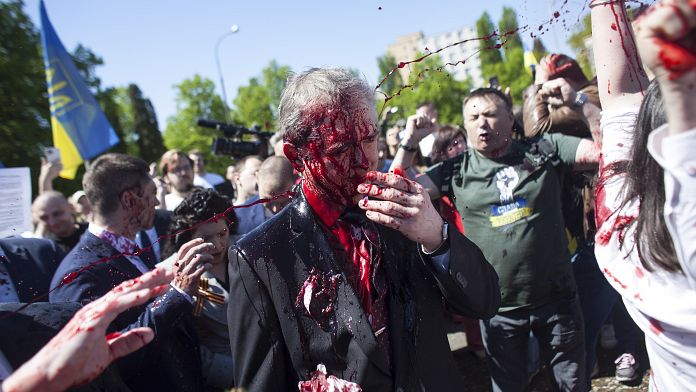 The Russian ambassador to Poland was hit with a red paint thrown as he prepared to celebrate the anniversary of World War II in Warsaw.

Sergey Andreev was greeted by hundreds of protesters when he arrived at the cemetery of Soviet soldiers in the Polish capital.

ace Russia celebrates Victory DayAndreev had planned to pay homage to the Red Army soldiers who died during the war in a Warsaw cemetery.

But his entourage was blocked by activists, who then doubled down as the ambassador with red paint.

Protesters carried Ukrainian flags and chanted “fascist” and “murderer” after the Russian invasion of Ukraine on February 24.

Other activists were dressed in white sheets smeared with blood, symbolizing the Ukrainian victims of the Russian war.

The police arrived to help the ambassador and other members of his delegation leave.

Andreev told reporters that he and his team were not seriously injured in the incident, according to the TASS news agency.

Poland has long supported the tightening of EU sanctions against Russia for the invasion of Ukraine, and the Warsaw authorities had initially warned the Russian embassy of a planned Victory Day march.

“We will make a formal protest,” Andreev told reporters on Monday.

“When they advised us not to organize a bigger event, we met them halfway, we didn’t aggravate the situation.”