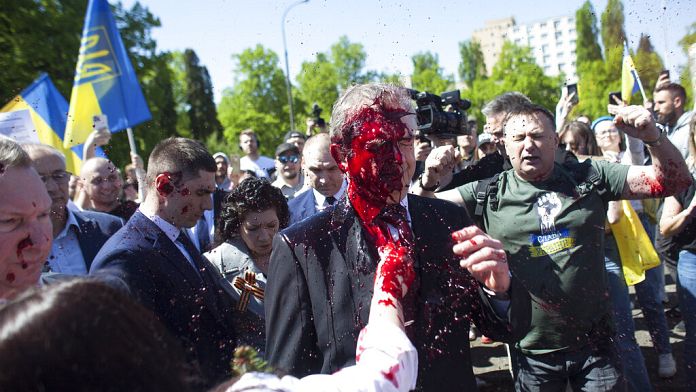 In all European capitals, Russian diplomats are receiving a distinctly cold shoulder, ranging from diplomatic expulsions by governments, to protests by individual citizens and denial of services by companies.

On Monday, the Russian Ambassador to Poland, Sergey Andreev, was doused with red liquid thrown in his face by a protester as he visited a cemetery in Warsaw to celebrate Victory Daythe day Russia celebrates victory over Nazi Germany in World War II.

It was the latest setback for Andreev, who had already seen his embassy’s bank accounts frozen and refused any attempts to meet Polish officials for diplomatic discussions.

His regular barber also refused to cut his hair, while insurance companies denied coverage for the embassy’s cars.

“We are practically isolated,” he told Reuters.

Since the start of the conflict in Ukraine in February, EU governments have expelled at least 400 Russian diplomats and support personnel. Warsaw also seized a building connected to the Russian embassy, ​​and Oslo renamed a street in front of the Russian mission “Ukraine Square”.

The tribulations of diplomats are not comparable to the destruction of war or the wider Western response, but they are a striking example of the depth of sentiment against the invasion and affecting Moscow.

The public protests have prompted the Russian Foreign Ministry to warn diplomats to think twice when venturing out after embassies are marred by red paint in Rome, Sofia and Prague.

In London in April, protesters piled pots and appliances in front of the Russian mission, referring to reports of Russian looting in Ukraine.

“There are attacks, practically terrorist acts against our institutions and against the physical security of diplomats,” Russian Foreign Minister Sergei Lavrov told Rossiya 24 television.

After the red paint incident on Monday, the Russian Foreign Ministry said it had filed a strong protest to the Polish authorities, which it accused of “practically conniving” with the protesters.

The Polish Foreign Ministry described the incident as deplorable, stating in a statement that “diplomats enjoy special protection, regardless of the policies pursued by the governments they represent.”

As in Warsaw, the Russian embassy in Paris also ran out of cash, with Moscow instructing diplomats to minimize spending, according to a diplomatic source from a country that has not imposed sanctions on Russia and continues to engage with the Embassy.

In Lithuania, two major banks have or will cut money transfers to and from Russia and Belarus, and as in Poland, insurance companies have refused to insure embassy cars.

The Russian embassy in the Lithuanian capital, Vilnius, confirmed its problems.

“The embassy has recently faced a number of problems in the banking and insurance sector, as well as with the fulfillment by some companies of the obligations deriving from existing contracts,” said Press Secretary Alexander Kudryavtsev.

The measures have led to some retaliation by an increasingly isolated Russia, which has kicked out an unknown number of European diplomats.

The Polish foreign ministry said roads have been dug around its embassy in Moscow and that the work of the embassy and its consulates has been “limited in every way on the Russian side”.