Russian Nobel-winning editor says he was attacked with red paint 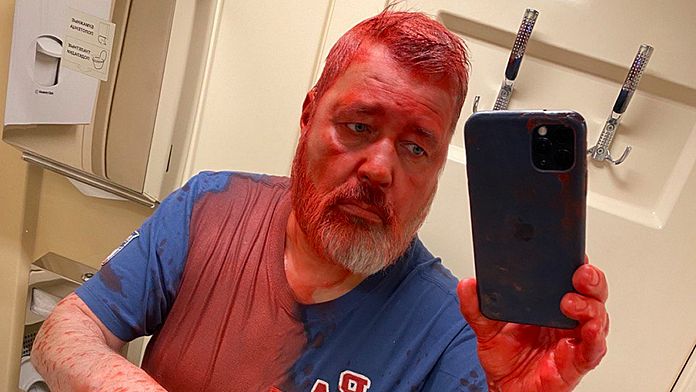 Muratov told Novaya Gazeta Europe, a project launched by newspaper staff after the paper suspended its operations last week under government pressure, that the assault occurred on a train heading from Moscow to Samara.

“They poured oil paint with acetone in the compartment. My eyes are burning terribly,” Muratov was quoted as saying on Novaya Gazeta’s Telegram channel. He said the assailant shouted: “Muratov, here’s one for our boys.”

Novaya Gazeta, Russia’s leading independent newspaper, announced on March 28 that it was suspending operations for the duration of what it referred to in quotation marks as “the special operation” in Ukraine, the term that Russian authorities insist media must use for the war in Ukraine.

The newspaper was the last major independent media outlet critical of President Vladimir Putin’s government after others either shut down or had their websites blocked since Russia’s invasion of Ukraine began on Feb. 24.

The trigger for the shutdown was a second formal warning from the Russian media regulator Roskomnadzor, which has increasingly taken on the role of a censor in recent years, Novaya Gazeta had long had a difficult relationship with the government.

Longtime editor Muratov shared the 2021 Nobel Peace Prize with Maria Ressa, a journalist from the Philippines.

Exactly why Novaya Gazeta was warned remains unclear. Roskomnadzor told state news agency Tass that the newspaper had failed to identify an unnamed non-governmental organization as a “foreign agent” in its reporting, as required by Russian law. It didn’t specify the report in question.

Novaya Gazeta removed much of its war reporting from its website after Russian lawmakers passed a law on March 4 threatening jail terms of up to 15 years for information deemed to be “fake” by Russian authorities. That can include any mention of Russian forces harming civilians or suffering losses on the battlefield.