A jaw-dropping optical illusion can trick the brain into thinking a static black hole is expanding, the researchers demonstrated.

This “expanding hole” illusion, new to science, was created by Professor Akiyoshi Kitaoka, a psychologist at Ritsumeikan University in Kobe, Japan.

In tests, 86% of the volunteers felt that the central black hole was expanding, as if it were moving into a dark environment such as a tunnel, or falling into a hole.

The image is so good at tricking our brains that it causes the pupils to dilate, just as it would if we actually moved into a dark area. 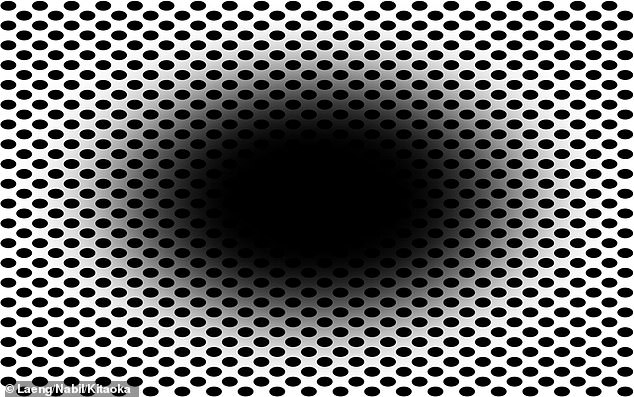 Check out this image. Do you feel that the central black hole is expanding, as if you are moving into a dark environment or falling into a hole? The “expanding hole” is a new illusion for science, say the researchers

HOW DOES ILLUSION WORK?

The “expanding hole illusion” shows an expanding central black hole, as if the viewer were moving into a dark environment or falling into a hole.

The circular central black hole evokes an impression of optical flow: experiencing movement through what we see.

According to the researchers, when people see the image, the pupil tends to dilate (enlarge) to let in more light.

According to the researchers, when people see the image, the pupil tends to dilate (enlarge) to let in more light.

“The ‘expanding hole’ is a highly dynamic illusion,” said Professor Bruno Laeng, who conducted the experiments at the Psychology Department of the University of Oslo.

“The circular spot or shadow gradient of the central black hole evokes a marked impression of optical flow, as if the observer were heading for a hole or a tunnel.”

Professor Kitaoka, who created the image, is known as the creator of optical illusions, including the famous spinning snake illusion and the ‘Asahi’ illusion of brightness.

Asahi’s illusion has a central region that appears brighter than its white background, even though it’s the same white everywhere.

To test the effectiveness of the new image, the researchers recruited 50 people with healthy eyesight between the ages of 18 and 41. 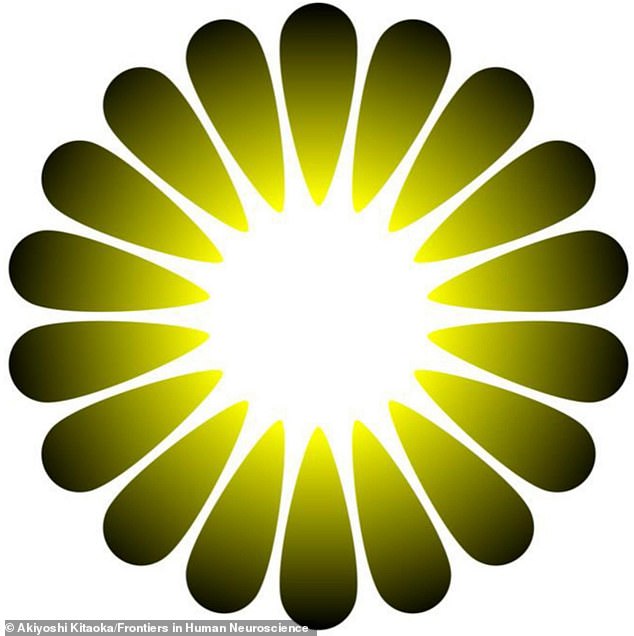 Professor Kitaoka is already known as a creator of optical illusions, including the famous illusion of spinning snakes and the illusion of brightness “Asahi” (pictured). Asahi’s illusion has a central region that appears brighter than its white background, even though it’s the same white everywhere

All the volunteers were shown the image, as well as several variations of the image with different colors, for a few seconds on a computer screen. 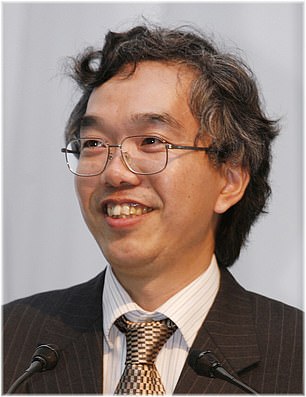 Professor Akiyoshi Kitaoka, a psychologist at Ritsumeikan University in Kobe, Japan, is co-author of this new study.

An infrared eye tracker recorded constriction and dilation of the pupils of the eyes as the different images were presented.

For each, participants were asked to subjectively rate how strongly they perceived the illusion.

As a check, attendees were also shown “scrambled” versions of the expanding hole images, with the same luminance and colors, but for no reason.

The researchers found that the illusion was most effective when the hole was black: only 14% of the participants did not perceive the illusion in this case.

Meanwhile, a slightly higher percentage did not see the hole if it was in color: on average 20% for all colors.

The researchers also found that the black holes promoted strong reflex dilations of the participants’ pupils, while the colored holes prompted their pupils to shrink.

In the photo there are the different images of the expansion hole in different colors (left), as well as the “scrambled” control images (right)

For black holes, but not colored holes, the more individual participants subjectively assessed their perception of the illusion, the more the pupil diameter tended to change.

Among those who perceived expansion, the subjective strength of the illusion was different, although it is not clear exactly why.

It is possible that other vertebrate species, or even non-vertebrate animals with “camera-like” eyes, such as octopuses, may perceive the same illusion.

Octopus eyes focus through movement, much like the lens of a camera or telescope, rather than changing shape like the human eye lens.

The results of the study were published in the journal Frontiers in human neuroscience.

having depression makes the effects of some optical illusions less pronounced, a study suggests.

Finnish researchers tested the visual perception of people with and without depression, using small squares of the same colors imposed on different backgrounds.

Visual perception is likely related to information processing in the cerebral cortex, the outermost layer of the brain involved in sensation, perception, memory and conscious thinking.

Scientists state that there is impaired cortical processing of visual contrast during a major depressive episode.