An incredibly rare species of deep-sea dragonfish with a shimmering metallic bronze hue has been spotted in the ‘twilight zone’.

This species – which is the rarest of all the dragonfish – has smooth skin and a  bronze colour that may help with camouflage for hunting.

Although they are strong swimmers, they prefer to lie in wait and ambush unsuspecting fish and crustaceans.

The twilight zone begins where only 1 per cent of light reaches and ends where there is no light at all. There’s so little light at this level that marine life have to rely on faint silhouettes to find prey. So the highfin dragonfish produces light to mask its silhouette

The twilight zone begins where only one per cent of light reaches and ends where there is no light at all.

There’s so little light at this level that marine life have to rely on faint silhouettes to find prey.

‘MBARI researchers have observed a few different dragonfishes in the depths of Monterey Bay, but this one is the rarest we’ve encountered,’ the institute said in a statement.

‘In more than three decades of deep-sea research and more than 27,600 hours of video, we’ve only seen this particular species four times.’ 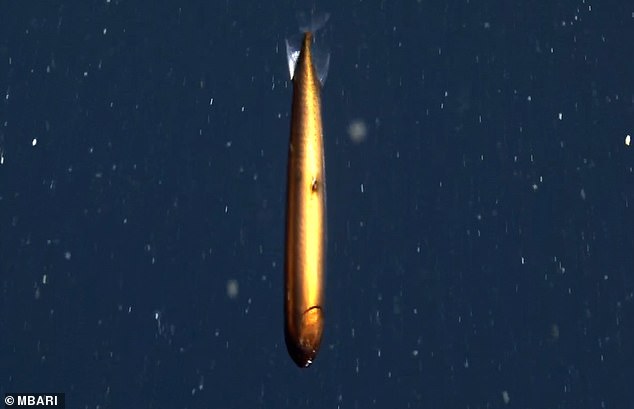 Footage of the highfin dragonfish (Bathophilus flemingi) swimming downwards in ‘the twilight zone’ – the part of the ocean spanning 660 feet (200 metres) to 3,300 feet (1,000 metres) down 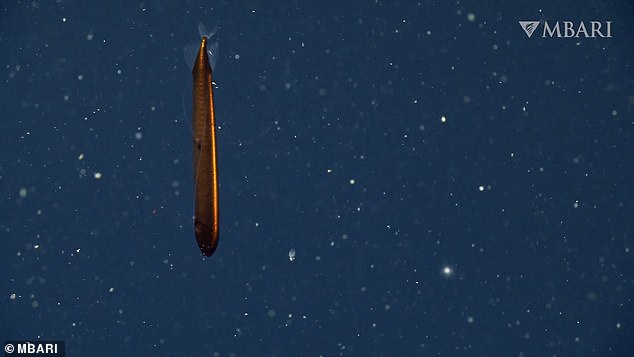 The species’ metallic bronze colour absorbs remnants of blue light that make it down to the depths, rendering the fish nearly invisible

The highfin dragonfish can be up to 6.5 inches (16.5cm) long, although researchers did not catch this particular specimen so measurements weren’t made.

Like other creatures in the twilight zone, the highfin dragonfish uses a trick called counter-illumination – meaning it uses light to mask its silhouette, helping it blend in with its surroundings when it needs to hide.

According to Bruce Robison, senior scientist with MBARI, its metallic bronze colour absorbs remnants of blue light that make it down to the depths, rendering the fish nearly invisible.

‘But when we shine our white lights on it, it’s just gorgeous,’ Robison told Live Science. 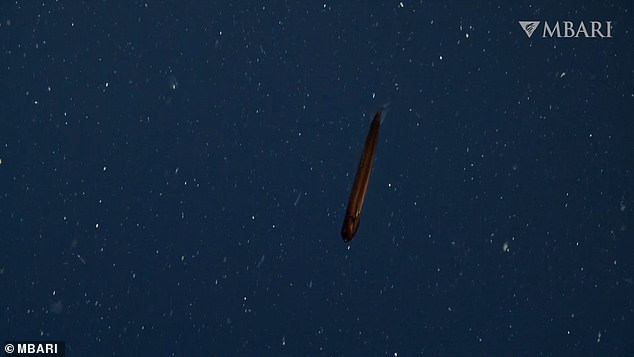 MBARI scientists have observed several different dragonfishes in the depths of Monterey Bay, but this species is a ‘rare treat’

Being effectively invisible means that the dragonfish can often go unnoticed by its unfortunate prey and swallow them whole.

The cunning species has another amazing trick to lure predators – it has a small light-emitting filament that extends from its chin.

‘It uses that lure to attract prey that see the spot of glowing light and are drawn to it because they think it’s something small enough that they can eat,’ Robison said. 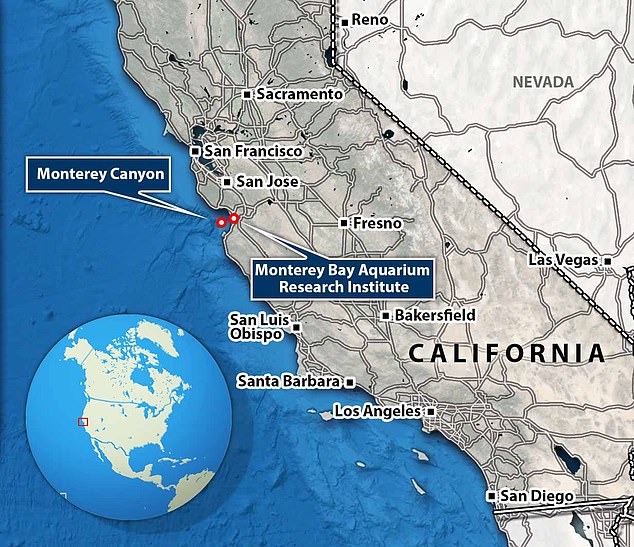 The discovery was made by marine scientists at Monterey Bay Aquarium Research Institute, which looks over Monterey Bay. Monterey Canyon is an underwater canyon in Monterey Bay

Its fins also have long, thin, wing-like filaments that may sense vibrations in the water, alerting the fish when predators or prey is approaching.

They likely provide stability and keep the fish from sinking while it lies in wait for food.

MBARI scientists have observed several different dragonfishes in the depths of Monterey Bay.

The Pacific blackdragon (Idiacanthus antrostomus) and the longfin dragonfish (Tactostoma macropus) are the most commonly sighted species, but encounters others are ‘rare treats’.

‘STRAWBERRY SQUID’ IS SPOTTED OFF THE COAST OF CALIFORNIA

An amazing ‘strawberry squid’ with one small blue eye and the other large and green has been filmed spotted in the ‘twilight zone’ off the coast of California.

The squid’s name refers to its red pigmentation and the presence of photophores – organs that appears as luminous spots along its body – making it appear like a strawberry with seeds.

Like many deep-sea animals, the strawberry squid is bright red – but red light does not reach the deep sea.

So a crimson coloration actually appears black and helps the squid hide from the gaze of predators like sperm whales, dolphins, tunas, swordfish and sharks.

Researchers shined light from an unmanned submersible to capture footage of the creature in high resolution.

Read more: ‘Strawberry squid’ is spotted off the coast of California