Teens who live with only one of their parents are more likely to show ‘delinquent’ behaviours – even if there’s a step-parent in the home, a new study says.

Academics in Sweden studied surveys of 14 and 15-year-olds in a variety living arrangements, including living with both parents, a single parent and a step-parent.

Some of the adolescents had engaged in various offences, ranging in seriousness from graffiti to robbing someone and carrying a knife as weapon.

Teens living in single-father, single-mother, father-stepmother and mother-stepfather households reported more delinquency than those living with both their parents, the academics found.

The study authors have stressed that if a teen is living with only one of their biological parents is does not necessarily mean they are delinquents.

As they studied results from Swedish teens of quite a narrow age range, further research may be needed. 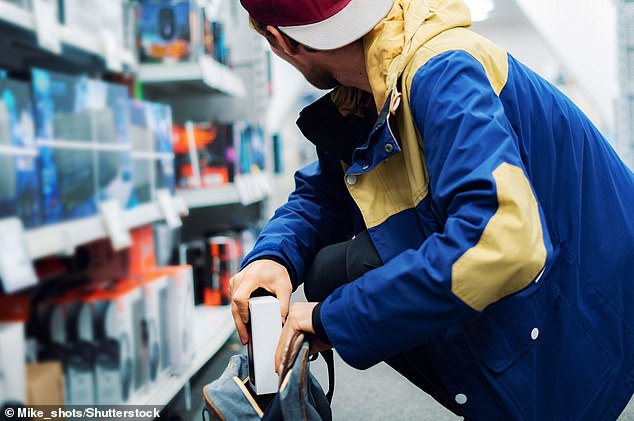 Teenagers who live in single-parent families are more likely to show ‘delinquent’ behaviours such as shoplifting and graffiti, the study says

Self-reported delinquency was defined as any of the following committed during the past 12 months:

– Carried a knife as weapon when going out

– Stolen something from someone’s pocket or bag

The new study was published this week in the open-access journal PLOS One by Robert Svensson and Björn Johnson at Malmö University, Sweden.

‘This study shows that it is important to move on to the use of more detailed categorisations of family structure in relation to delinquency,’ they say in their paper.

‘We need to increase our knowledge about the group of adolescents that moves between parents.’

Previous studies have found that not living with both parents is positively associated with delinquency behaviours.

For the new study, the researchers took into account the wider living arrangements of teens who did not live with both of their parents.

They made the distinction between teens living in either ‘symmetrical’ or ‘asymmetrical’ family arrangements.

Meanwhile, ‘asymmetrical’ family arrangements are those where either the mother or the father, but not both, have a new partner. 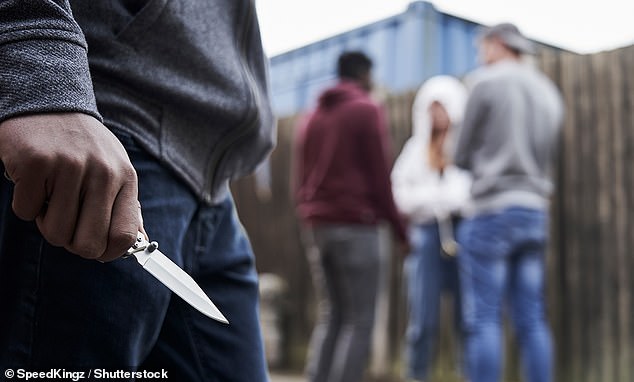 For the study, behaviours defined as delinquent ranged in seriousness from graffiti to robbing someone and carrying a knife as weapon

Researchers used data from four cross-sectional surveys carried out between 2016 and 2019 in southern Sweden, comprising a total of 3,838 teens aged 14 to 15.

The surveys were conducted at 17 secondary schools in eight small municipalities in the county of Skåne, Sweden’s southermost county, with a population of around 1.4 million.

Data included self-reported information on nine delinquent behaviors – incluidng shoplifting, graffiti, robbing someone and carrying a knife when out the house – as well as detailed family structure.

Among all participants, teens in symmetrical families – where parents live separately and share custody but are both single or both have new partners – generally reported lower levels of delinquency than those in asymmetrical families.

However, the experts also found that many of the associations between family structure and delinquency declined when adjusted for data on parental attachment and monitoring.

Researchers admit they did not prove causality in their study – in other words, they did not demonstrate that certain family structures cause delinquency and other don’t.

Another limitation is that the study sample came from teens in just a single Swedish country; further research would ideally include a much bigger sample.

Overall, the authors conclude that categorising family structure more precisely can shed light on the contributing factors of delinquency.

GIRLS WITH SINGLE PARENTS ARE MORE LIKELY TO BE OBESE: 2017 STUDY

Girls with single parents are twice as likely to be obese than their peers living in a two-parent household, a 2017 study found.

Researchers at QIMR Berghofer in Brisbane, Australia found that girls aged 12 to 17 were more likely to consume a less healthy diet in a single-parent home.

It also discovered that these girls tend to ‘spend more time in sedentary behaviour’, which also contributes to the higher obesity risk.

Low education and avoiding sport were contributing factors to obesity in all young girls in the adolescent age group, no matter their living arrangement.

And girls whose parents were not university educated were significantly more likely to be obese.

Their risk only increased if they lived in a single-parent household, which made them three times more likely to be obese.

The study found that junk food was, surprisingly, not a major cause of obesity for adolescent girls.

But junk food and regular takeaway consumption were discovered to be the major reasons that boys aged 5 to 11 were obese.

Pre-made foods or fried foods such as burgers, pizza, sausage rolls and chips were considered ‘takeaway foods’ in the research.

The study also found that boys whose parents did not attend university were twice as likely to be obese.

And, as with girls, the research discovered that boys who avoided sports were also at risk of gaining an excessive amount of weight.

The Brisbane institution was examining the different causes of obesity between young and adolescent boys and girls, surveying the parents of 3,500 children.

Four per cent of girls aged 12 to 17 were found to be obese, a lower number than both boys in the same age range and girls who were younger than them.

QIMR Berghofer senior biostatistician Professor Peter O’Rourke said more research is needed to find out why girls with single parents are more likely to be obese.

But he added that parents need to focus on the things they can easily change, like diet and exercise.

‘While some factors are beyond parents’ control, some of the best things they can do are encouraging regular exercise,’ he said.

O’Rourke also recommended that parents provide a healthy diet packed with fruit and vegetables and that they provide less takeaway meals at the dinner table.