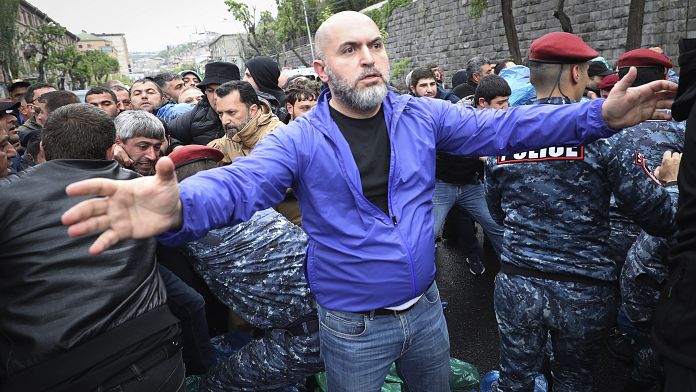 Tens of thousands of protesters blocked roads and gathered around government buildings in the Armenian capital on Wednesday to demand the resignation of the prime minister for his demands for a formal peace deal with neighboring Azerbaijan.

Protesters used concrete mixers and trucks to close roads and bridges leading to the center of Yerevan.

They marched, chanting “Armenia without Nikol”, referring to Prime Minister Nikol Pashinyan. Clashes with police broke out and several arrests were reported.

Anti-government demonstrations have been held almost daily since April 17.

The prime minister has become a renewed target of grudge after speaking in parliament about the need to sign a peace agreement with Azerbaijan.

The two countries have been clashing for decades over the breakaway Nagorno-Karabakh region, which is part of Azerbaijan but has been under Armenian control since the early 1990s.

During a six-week war in 2020, Azerbaijan claimed control over part of the region before signing a Russia-mediated truce with Armenia.

“We can only talk to the authorities about one thing: their immediate departure,” said opposition politician Ishkhan Saghatelyan, vice president of the country’s parliament. He called on all Armenians to join in civil disobedience and for the protests to continue every day.

Police arrested some of the demonstrators and security officials warned them not to attempt to storm the parliament building, but they massed outside, near the Interior Ministry and in other parts of the capital.

Inside the parliament, opposition politicians have called for Pashinyan’s resignation in his presence. He said he would deal with the grievances, but the naysayers left before he could.