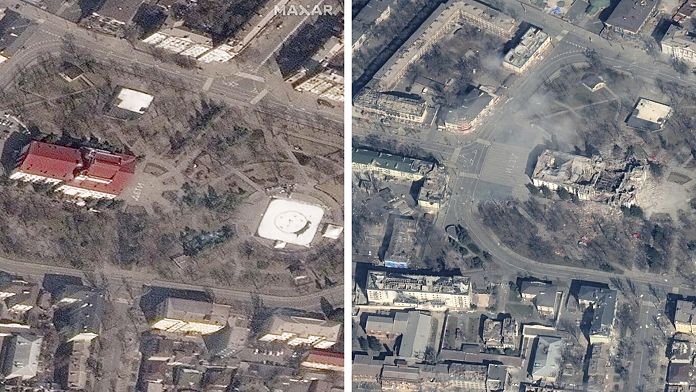 According to an Associated Press investigation, the number of civilians feared to have been killed in the bombing of a theater in Mariupol in March is higher than initially expected.

It says around 600 people have died inside and outside the building, double the estimated number of lawsuits.

AP reporters drew on interviews with 23 survivors, rescuers and people who are intimately familiar with the shelter operating at the Donetsk Academic Regional Drama Theater, as well as two sets of theater plans, photos and videos taken at the internal before, during and after that day and expert feedback.

No one, including rescuers, has seen more than 200 people flee alive, and most have seen even fewer. These numbers are in line with survivors’ estimates of Mariupol city officials who say 130 have fled. While the Organization for Security and Cooperation in Europe cites a number slightly higher than 150. The survivors fled the main exit or a side entrance because other areas of the building were crushed.

After building the 3D model, the AP returned to the witnesses to check and adjust. Two war crimes experts reviewed AP’s methodology for comparing floor plans with witness descriptions and concluded that it was as robust and definitive as possible in the absence of access to the site.

Two survivors estimated around 300 had died, as authorities initially estimated, and the lack of bodies led a policeman and a Mariupol Red Cross officer to speculate that the toll was less than 500. But most witnesses did. claimed that the dead were closer to 600, in line with the AP’s density analysis and suggested that the bodies had been pulverized into dust or removed by the Russians. AP also spoke to two ammunition experts.

The true toll of the attack may never be known. With the theater and surrounding neighborhood controlled by Russian forces, the crews have already begun to clean up the rubble and with it all the evidence it contains.

Oksana Syomina and her husband were in the basement at the time of the attack. She says they had to climb over the bodies before escaping the building.

“All the people are still under the rubble because the rubble is still there – no one dug it up,” Syomina said, weeping at the memory. “This is a big mass grave,” she says.

Sixteen direct witnesses, most inside the theater, said the building was packed, with about one person for every three square meters of free space in the rooms and corridors. Everyone said that more than 100 people were around the camp kitchen outside the building and that all died there.

Maria Kutnyakova and her family were taking refuge in the theater but managed to escape before the attack.

“This was the final proof that they are not at war with the army, they are at war with every Ukrainian, with every neighbor of Mariupol. They did not come to capture the city. They came to destroy it,” he said.

Yulia Marukhnenko lived near the theater and ran to help after the attack, “the people who had died on the upper floors,” she said. “Those hiding away from the windows were in the upstairs, second and third floor corridors. That’s where they slept, where they stayed. And when the rocket hit, they must have died instantly. the whole building fell on the kitchen of the theater, where there was also a lot of people “.

Speaking of the psychological effects, Yulia said: “It is very difficult in psychological terms when someone around you calls the father, someone calls Vania, Vova … A woman is carried away by the arms and shouts: ‘No” I don’t want to live. ! Why should I live if the whole family is dead? “

Russia Denie’s involvement in the theater strike and, without evidence, accused the Azov regiment of blowing it up.