The “splash” count suggests that the number of flying insects has plummeted by 60% in less than 20 years: report

Counting of “splashes” on vehicle license plates suggests the number of flying insects has plummeted by 60% in less than 20 years, the report says.

from Colin Fernandez, environmental correspondent for the Daily Mail

The number of British insects has declined at a “terrifying” rate, which threatens our way of life, warns a report.

Moths, flies, aphids, bees and flying beetles have all declined by nearly 60% in less than 20 years, according to a survey by Kent Wildlife Trust and Buglife.

A world without them could make life on Earth very difficult. 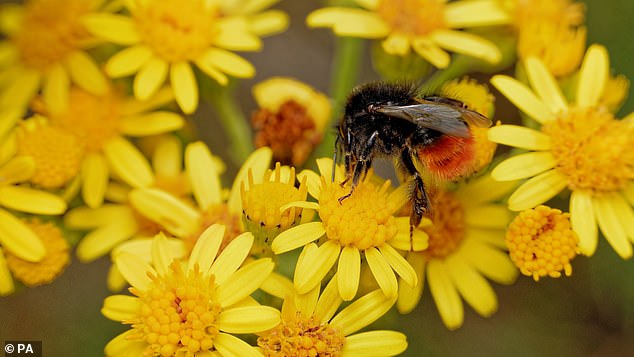 In addition to pollination, bees are essential for natural pest control and for returning nutrients to the soil

The survey asked the public to record the number of flying insects squashed on the license plate and compare it to data from 17 years ago.

Reasons for the decline include the widespread use of insecticides, habitat fragmentation, climate warming and the loss of wildflowers on farms.

Matt Shardlow, CEO of Buglife, said: “This landmark study suggests that the number of flying insects is decreasing by an average of 34% every decade, which is terrifying.”

It must be maintained, he added.

The counts of insects such as moths, butterflies, flies, flying beetles and ants, aphids, wasps, bees and lace were different in the UK, with England recording the largest drop of 65% compared to 17 years ago.

Wales recorded 55% fewer insects, Scotland recorded a 28% decline from 2004 figures, and there were too few polls in Northern Ireland to draw separate conclusions, conservationists said.

Paul Hadaway, Kent Wildlife Trust’s director of conservation, said the decline in insects reflects the massive threats and loss of wildlife across the country.

“These declines are occurring at an alarming rate and without concerted action to address them we face a difficult future,” he warned.

‘Insects and pollinators are critical to the health of our environment and our rural economies.

“We need action for all of our wildlife now by creating ever larger areas of habitat, providing corridors through the landscape for wildlife and allowing the wilderness to recover.”