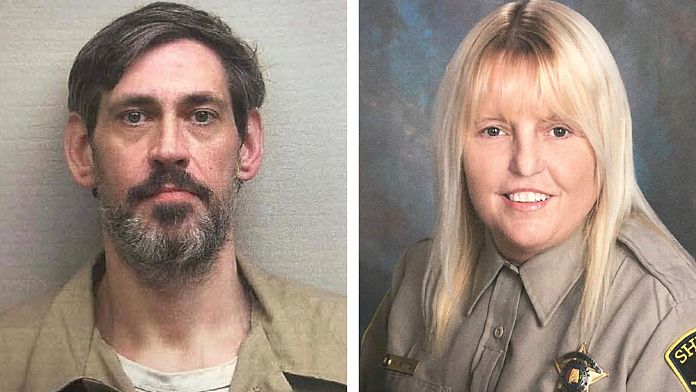 Inmate Casey Cole White, 38, was chained and handcuffed when he and Vicky White, the assistant to the facility’s corrections director, left the Lauderdale County Detention Center in Florence, Alabama on Friday morning.

They have not been seen since, although the patrol vehicle the two used when they left the detention center was found in a nearby mall parking lot.

The authorities have no idea where they are, although the detainee should be recognizable by his size. It is 2.06 meters tall and weighs around 118 kilograms. Authorities warned that anyone who saw the couple shouldn’t come near them.

“We consider both of them dangerous and, in all likelihood, both individuals are armed,” United States Marshal Marty Keely said at a news conference Monday. He noted that Casey White will “stand out” for his size, even though he has changed in appearance.

Lauderdale County Sheriff Rick Singleton said he issued an arrest warrant for Vicky White, 56, on charges of allowing or permitting an escape. She is not related to Casey White, who was serving a 75-year prison sentence and awaiting trial on capital murder charges.

Vicky White told colleagues she would take him to court for a mental health assessment. But Singleton later claimed that such an assessment had not been scheduled. She also violated a policy that required more than one official to be involved in the transportation of detainees, a rule that officials stressed for her White because she had previously attempted to escape, Singleton said. The sheriff said a video showed the couple left prison and went straight to the mall’s parking lot.

“We know that she participated, if she did it voluntarily or if she was forced, somehow threatened to participate, I’m not really sure. We know for a fact that she attended, ”Singleton said.

Casey White was serving his sentence for a series of crimes that included attempted murder, robbery and burglary. While in prison, he confessed to the stabbing death in 2015 of a 58-year-old woman, authorities said, who took him to Lauderdale County Jail for prosecution. The sheriff said they believe White planned an earlier escape from prison in 2020 when they found a makeshift knife.

Could be sentenced to death if convicted of capital murder. The US Marshals Service offers up to $ 10,000 for information.

Singleton said Vicky White was an exemplary employee and the prison employees are “just devastated.” “This isn’t the Vicky White we know, by any stretch of the imagination,” the sheriff said.

Vicky White had planned to retire and Friday would be her last day. She said she had sold her house about a month ago and she “talked about going to the beach”.

The sheriff said they had no leads as to where the two are at this point.

“If we knew where they were, we would be there and not here,” Singleton said.

As an assistant to the director of corrections, Vicky White moved throughout the county detention facility and had multiple opportunities each day to be in contact with a particular inmate, the sheriff said. Her job duties also included coordinating the transportation of detainees.

Vicky White’s mother Pat Davis told WAAY she was shocked and scared for her daughter.

“As a mother, I didn’t know how to behave because at first I thought it was a mistake. And then when I found out it was, it was just disbelief, ”says Pat Davis. He told the station that “we only want her back” and found it hard to believe that her daughter would help an inmate escape.

“He never did anything, I bet he never got even a speeding ticket,” said Pat Davis.

Lauderdale County District Attorney Chris Connolly also said he was shocked. On Thursday he last talked to Vicky White about transporting an inmate with a broken ankle to get medical attention, and nothing seemed unusual.

“She is someone I would have trusted with almost anything. She was one of those people you could call if you needed something to happen in that prison. She was the go-to person, ”Connolly said.