“This is one person’s war” and “We are not fighting Russia,” says EU top diplomat Borrell 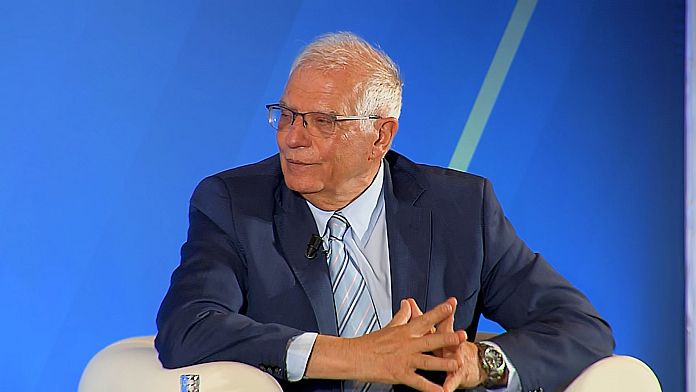 EU foreign policy chief Josep Borrell insisted the EU “is not fighting Russia” but “defending Ukraine” during a high-level meeting State of the union event in the Italian city of Florence.

Speaking exclusively to Euronews, Borrell said: “I don’t like the story of the West versus Russia or the West versus the rest … this is a matter on the UN Charter. It is about the sovereignty of the people of the United States. states, respect for borders in order not to use force to override others.

The EU High Representative for Foreign Affairs also told Euronews Meabh McMahon that it is important to distinguish between Russia and Putin.

“We have nothing against the Russian people. It is one regime, one political system, one person. This is one person’s war. So yes, we want to weaken Putin, but we don’t want to push Russian people against the border of history. One way or another they must be part of a peaceful agreement and a peaceful security system in Europe. “

Borrell was joined on stage by former Finnish Prime Minister Alexander Stubb. Both men agreed that the war represented a historic turning point for Europe.

“I think this is the moment when the European Union acts as a geopolitical actor making decisions, including on the military side, on the energy side, using the language of power,” said Borrell.

Praising the speed with which European leaders reacted in the aftermath of the invasion of Russia, Stubb said: “I think the European Union has gone from a regulator, or regulatory superpower, to an actor. Quickly it happened. You know, he was an actor in the euro crisis, but it took a few years. He was an actor during COVID, but it took a few months. When the war came, it only took a few days. . And we’ve been able to back down a lot of things. “

‘The price of war’

“We need to explain the price of war because unity and solidarity last for a while. But with inflation, with energy prices, with food prices and with the asylum situation, let’s say, in Poland, it won’t last forever. “

The war in Ukraine highlighted Europe’s dependence on Russian energy, and Borrell agreed that there would be a price to pay if Europe is to successfully defend its freedoms and values.

“If we don’t want the jungle to invade our garden, then we have to pay a price for it.

“We need to understand that defending freedom and fighting those who fight against Ukraine will come at a cost. And politicians should have the courage to explain to people that this cost must be accepted because otherwise the cost will be much greater.”

Asked whether this would mean a Russian gas embargo, Borrell said this would not be immediate, although he stressed that the EU is moving swiftly to end its reliance on Russian energy supplies.

And Borrell insisted that there were still other ways Europe could damage the Russian economy if it decided to do so.

“One thing everyone is talking about is the oil ban. I’m not going to buy your oil. There are other ways to give Putin trouble: insurance. If we decide that our insurance companies will not provide insurance for the Transportation of Russian oil, not even in Europe, anywhere in the world, will be a major obstacle for the Russians to transport their oil, not to Europe, but to the rest of the world. “

_To watch the full interview, click on the video player above_