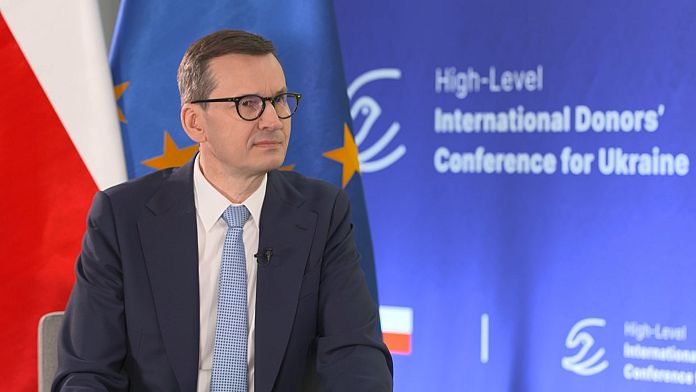 President Vladimir Putin is a “war criminal” who is committing “genocide” in Ukraine and the European Union must not resume “business as usual” with Russia as long as he remains in power, the prime minister told Euronews. Polish Mateusz Morawiecki interview.

“This Russia is totalitarian, it is nationalist, it is imperial and this Russia wants to re-establish the Russian empire and a post-Soviet type of state.”

“We cannot see a situation where there is a withdrawal from business as usual. Women and children are dying. Russia [commits] genocide in Ukraine and war crimes. Not with this regime, “she added.

“Putin is a war criminal and what he is responsible for in Ukraine is simply beyond imagination. I think we should create an international tribunal to track down crimes and do justice again when the war is over.”

Morawiecki spoke to Euronews’ Efi Koutsokosta at the end of an international donor conference he hosted with Swedish Prime Minister Magdalena Andersson in Warsaw.

During his interview for The Global Conversation, the Polish premier spoke at length about the Russian invasion of Ukraine, which he described as “brutal”, and the geopolitical implications for the entire continent.

Since the war broke out on February 24, Poland has been at the forefront of international condemnation of the Kremlin, calling for arms deliveries and the EU’s toughest set of sanctions.

“I believe the war will end sooner rather than later. But it all depends on the courage and determination of the Ukrainian nation. So we should all be grateful for the enormous courage and courage and what they are doing to defend their sovereignty and freedom”, he said.

“We know that they are defending, on the barricades, not only their freedom, but also the security and peace of the whole of Europe”.

Morawiecki dismissed Russian nuclear threats as a “sign of their weakness” and said the Kremlin would think “twice” before expanding military aggression towards neighboring countries such as Moldova.

“But nobody knows because this is in the hands of the Kremlin leaders,” he admitted.

The prime minister spoke the day after European Commission proposed a phased EU-wide ban on Russian oil imports to deprive the Kremlin of one of its main sources of income.

The ban is seen as the EU’s most radical move to date and has raised concerns among some highly dependent countries, including Hungary, Slovakia and the Czech Republic, which have now called for a longer timeline to introduce the measure.

“Frankly, there are several countries in different positions in terms of their dependence on oil and gas, and we understand that,” Morawiecki said when asked about the oil ban negotiations.

“There are discussions with the European Commission about what the provisional periods could be. However, they will not block those sanctions, as far as I know.”

The war exposed the EU’s entrenched dependence on Russian energy, built on the assumption that closer trade attempts with Moscow would bring the country closer to the West. Long-standing conviction collapsed overnight as Russian troops entered Ukraine and began bombing cities.

Last week, the Russian energy company Gazprom informed Poland and Bulgaria that it would cut off gas supplies to the two countries.

“I have always supported the toughest series of sanctions. So I know what I’m talking about,” the Prime Minister said.

“We shouldn’t be looking for any kind of scapegoat or pinpointing this or that country because we know there were much larger countries that were trying to stop, decelerate, postpone, procrastinate,” added Morawiecki, in a seemingly veiled reference to Germany. , a country often accused of enabling the Putin regime through a policy of pacification.

Until the week itself when the war broke out, Germany had vigorously defended the legitimacy of Nord Stream 2, a submarine conduit to bring more Russian gas directly into the country. The controversial project was launched in 2015, a year after the annexation of Crimea to Russia.

“There were countries that were so dependent and wanted to be more dependent on Russian gas, and everyone knows who they are,” the Polish prime minister said.

“They were short-sighted because they could not imagine what would happen with this addiction. And Putin used it as a blackmail towards the rest of the European Union.”