Ukrainians return home despite war raging in their home country 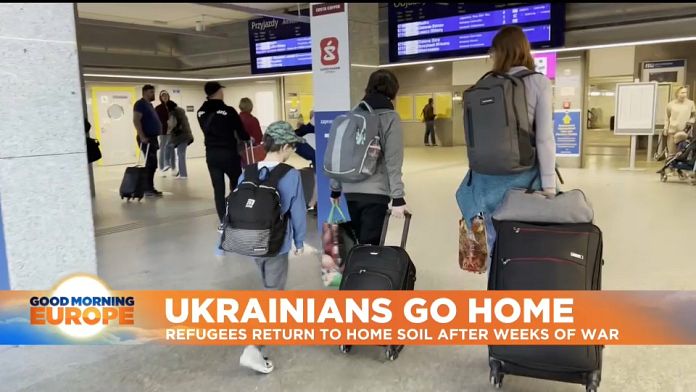 Since the start of the war in Ukraine, millions of refugees have crossed borders, hoping to find a safe place in a neighboring country.

However, some Ukrainians went the other way and decided to go home.

In the first weeks of the war, the flow of returnees was mostly Ukrainian men who wanted to join the struggle; but this trend has now changed and more and more women and children want to return to their homeland.

“In those early days of military operations in Ukraine, about 10,000 people traveled every day from Poland to Ukraine,” said Anna Michalska, press officer at the country’s border guard.

Olha Lavryk is one of those refugees who return home. She and her children are from the Ukrainian city of Sumy.

They stayed in Poland for a month and a half and are now reunited with Olha’s father, mother, aunt and husband in Ukraine.

“The children are very happy to go to their dad,” Lavryk told Euronews. “I cannot leave my country. Bomb warnings are heard continuously.

“Maybe now it’s more frequent but I don’t know … I’m coming back and I cry because I’m very afraid of coming back. I am very worried, for the children, for our lives.

“That we could get hurt. I am very worried. “

Many of those refugees staying in Poland have decided not to move to other Western countries. And many are waiting for peace and a quick return home.