Late Monday, we learned that the Supreme Court may be ready to overturn Roe v. Wade, the landmark 1973 decision that established the constitutional right to abortion.

There is one point, though, in this debate that is clear: The majority of Americans don’t want to overturn Roe. How polls ask about support varies, but the vast majority of respondents — somewhere between 85 and 90 percent, according to most polls — think abortion should be legal in at least some circumstances.

We only have one poll taken after the Supreme Court draft opinion was leaked, but a May 3 Morning Consult/Politico poll also found that most don’t want to overturn Roe — albeit a slim majority, just 50 percent of registered voters. (This represented a small uptick in support from the last time Morning Consult asked the question in December, when 45 percent of registered voters supported upholding Roe.) Other polls taken within the last year have found identical or higher levels of support: 50 percent in a Marquette Law School poll, 62 percent in a Monmouth University poll and 69 percent in a CNN/SSRS one.

Americans’ feelings about abortion vary, though. Support for abortion in very Republican-leaning states, especially in the South, is low. Polls have found that support for abortion can change depending on the situation, too. For instance, there’s far more support for legal abortions in the cases of rape, incest or to save the life of the mother.

One of the most significant ways in which support for abortion varies depends on when in the pregnancy the abortion is perfomed. Polls have found that a large majority of Americans support abortion in the first trimester, but that support tends to drop in the second trimester.

Roe, of course, legalizes abortion up to the last few weeks of the second trimester, underscoring another important factor here: It’s not just that Americans hold contradictory opinions on abortion. Many Americans simply don’t know a lot about abortion — including its legality and accessibility where they live. 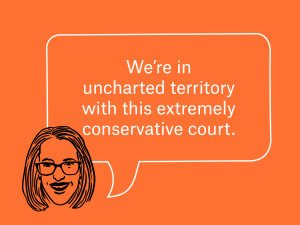 An ABC News/Washington Post poll conducted before Supreme Court Justice Samuel Alito’s draft opinion leaked found that people don’t know much about the current abortion landscape. According to the poll, only 30 percent of residents living in the 22 states that have passed abortion restrictions since 2020 were aware of the restrictions in their states, while 44 percent said they weren’t aware and 26 percent said they were unsure.

According to the Center for Reproductive Rights, a group that advocates for abortion rights, abortion would become illegal in about half the country if Roe were overturned. Its metric indicates that 24 states would likely ban abortion outright if Roe is weakened or overturned. In the other 26 states and the District of Columbia, abortion would likely remain legal — although some states have done more than others to ensconce abortion rights in state law or even proactively expand access.

The fact that most Americans know so little about the current abortion landscape means it’s really hard to understand how public opinion would change if Roe were overturned.

Part of this equation is the question of who would be affected most by a broader loss of abortion access. As FiveThirtyEight wrote earlier this year, who gets an abortion has changed a lot since the Roe ruling came down in 1973. Abortion patients are now much likelier to be nonwhite and low-income than they were 50 years ago.

This change is due in part to the fact that the U.S. has gotten a lot more diverse since the 1970s. But given what we know about the racial disparities in health outcomes and health care, particularly for Black and Hispanic people, this shift suggests that the most vulnerable members of our society will be most affected by the overturning of Roe.

It’s also likely why there hasn’t been more political ire about the wave of restrictions that have already made it much more difficult to get an abortion in some parts of the country — the experiences of the people who struggle most with the restrictions are easy for most Americans to ignore.

The reality is it might take time for the impact of the loss of abortion access to sink in with the broader public, given that low-income women are likelier to simply have to carry a pregnancy to term, while women with more wealth can consider traveling out of state for an abortion. That said, if abortion is banned in large swaths of the country, a broader crossection of women will be affected — which could mean that the new restrictions have a more dramatic impact on mainstream public opinion.

There are already some signs that, as abortion restrictions have increased across the country, Democrats have gotten more motivated to vote based on the issue. After the Supreme Court allowed a highly restrictive abortion law to go into effect in Texas last fall, the share of Biden voters who said abortion is a “very important” issue for them jumped, while the share of Trump voters who said the same thing fell.

Those trends have largely held steady since September, with Democrats continuing to prioritize abortion more highly than Republicans, which suggests that even though abortion has traditionally been an issue that was more galvanizing for GOP voters, a big shift in abortion access could upset the typical political order. Overturning Roe would represent a much bigger change than, say, an individual state’s restriction, which could mean that Democrats are especially angry about the issue going into the fall’s midterm elections.

Whether that could reshape the outcome of the midterms is, of course, an open question, since the overall environment is favorable to Republicans right now and voters are very concerned about other issues. But at the very least, a Supreme Court ruling that abruptly ends the constitutional right to abortion would vault the issue to the center of the political conversation — and change Americans’ lives in ways that many people may not expect.