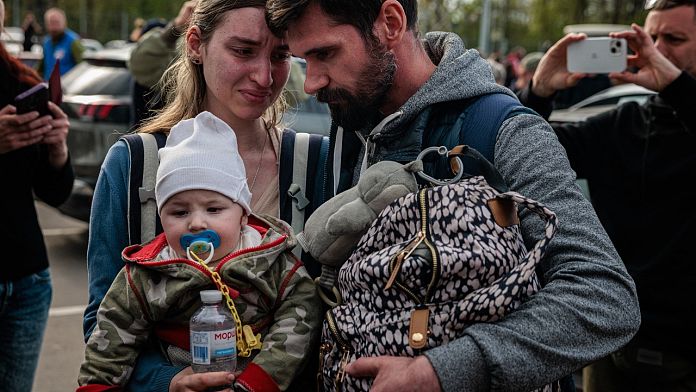 Dozens of civilians evacuated from a bombed steel mill in Mariupol recounted days and nights filled with terror and despair over the continuous bombing, after reaching relative safety in the territory controlled by Ukraine.

President Zelenskyy finally confirmed on Tuesday that 156 civilians evacuated from the city had arrived in Zaporizhzhia, a Ukrainian-controlled city 230 kilometers to the northwest.

One evacuee said he went to sleep in the plant every night for fear he would not wake up.

“You can’t imagine how scary it is when you sit in the air-raid shelter, in a damp, damp basement, and it’s bouncing and shaking,” 54-year-old Elina Tsybulchenko said upon arriving in Zaporizhzhia in a convoy of buses and ambulances.

She said that if the shelter was hit by a bomb like the ones that left the huge craters she saw on the two occasions she ventured out, “we’d all be fine.”

The displaced, some of them in tears, made their way from buses into a tent offering some of the comforts long denied them during their weeks underground, including hot food, diapers and connections to the outside world.

Mothers fed small children. Some of the displaced people browsed through shelves of donated clothes, including new underwear.

“We are so grateful to everyone who helped us. There was a time when we had lost hope, we thought everyone had forgotten us,” said another of the displaced, Anna Zaitseva, holding her baby in her arms. six months old, Svyatoslav.

Osnat Lubrani, UN humanitarian coordinator for Ukraine, said thanks to the evacuation effort over the weekend, more than 100 people – including women, the elderly and 17 children, the youngest by six months – managed to come out of the bunkers under the Azovstal steel mills and “see the light after two months”.

He added that around 30 people who left the plant chose not to leave Mariupol, saying they were “horrified” by its total devastation and wanted to first find out if their loved ones were still alive.

Ukrainian commanders said on Tuesday that Russian tank-backed forces began storming the sprawling facility, which includes a labyrinth of tunnels and bunkers spread over 11 square kilometers.

It was unclear how many Ukrainian fighters were still inside, but the Russians estimated the number at around 2,000 in the past few weeks and 500 would have been injured.

A commander of the Ukrainian Azov regiment has called for urgent help to evacuate the civilians still inside the plant and bring them to safety.

UN Secretary General Antonio Guterres has asked for a further respite from the fighting, along the lines of the one agreed in recent days between Ukraine and Russia to allow civilians to leave the Azovstal plant.

A convoy of buses left Mariupol on Wednesday in a new attempt by Ukraine, the United Nations and the International Committee of the Red Cross (ICRC) to evacuate civilians from Mariupol, the regional governor said.